The blue spix macaw as the name suggests, is blue in color. The bird is named after Johann Baptist von Spix, who was a German naturalist. He collected a specimen of the bird from the banks of Rio Sao Fransisco in Brazil in 1819, and at this time the bird was already rare. Deforestation, agricultural development and human encroachment for centuries in the habitats of these birds have significantly contributed to their rapid decline. Of the parrot genus Cyanopsitta, the blue spix macaw is a bird that is the only member. This bird, also known as the little blue macaw, is one of the world’s rarest macaws. It does not live in the wild anymore, as all the known blue spix macaws are in captivity. Conservationists came to the realization that only a captive breeding program would make preserving the species possible.

This macaw is a small bird that is blue in color and has pale skin on the area around the eyes. It is elegant and has an ash blue crown, wings and a tail that are bright blue in color, and a delicate blue gray plumage. There is a patch of skin that has no feathers around the eyes. The females and males of these species look similar, and cannot be distinguished by appearance. Females are however slightly smaller than the males. The tongue of a blue spix macaw is dry and slightly scaly, and inside it’s a bone. Young macaws have gray eyes, which later change to brown or yellow as they grow and mature. 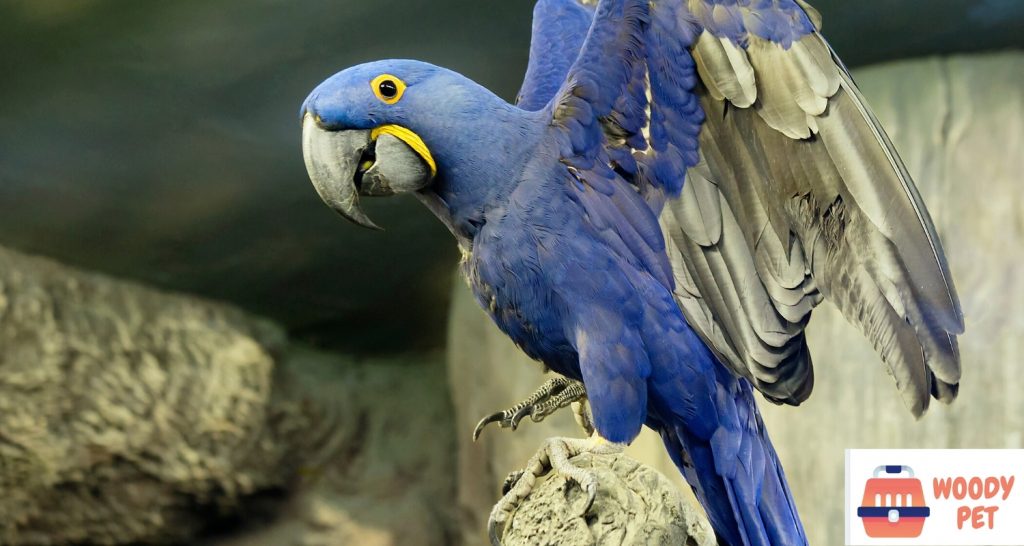 The native area of the blue spix macaw is in the state of Bahia, which is found in the north eastern part of Brazil. This area is full of desert vegetation made up of cacti and small thorny trees. It is said that there are more of the blue spix macaws in this area of Caatinga, Brazil, since the area has not been thoroughly explored.

Currently, the only blue spix macaws that are known to exist are in captivity in various parts of the globe. They are mostly kept in private collections. Tabebuia caraiba gallery woodland in Caatinga was the natural blue spix macaw habitat.

While in the wild, the blue spix macaw diet was frugivorous and granivorous, eating fruit and seeds. They would ear fruits from the zizyphus joazeiro cactus and the pau-de-coelher cactus. The seeds they ate were from the favela trees and the pinhao-brabo trees. They would sometimes eat from a local tree known as the licuri palm. The beak of a blue spix macaw is strong, therefore would easily crush a nut.

Now that they are in captivity, the blue spix macaws feed on a range of nuts, seeds and fruit. They also take vitamin and mineral supplements through consuming tree bark and cactus meat.

The blue spix macaws were sedentary birds while in the wild. They would be active during the day as they searched for food and looked for areas where they could nest.

They are shy birds and when an intruder approaches, they fly off. These macaws would also move when there was rainfall. When these birds feel threatened, they lie on the ground while on their sides, to draw away an intruder from their nest if there are chicks inside it.

The blue spix macaw behavior also involved moving in groups, mostly in pairs, as they went to look for food along rivers or to look for areas where they could roost or nest. They are monogamous birds, and mate with the same partners for a lifetime. While in the wild, the season for breeding was between November and March. They would lay about 2 to 3 eggs. However, while in captivity, they lay about 4 to 7 eggs. Only the female incubates, which goes for about 25 to 28 days. During this period, the male feeds her regularly. After the chicks hatch, they fledge for about two months and stay in the nest with their parents for about three months.

These birds are intelligent. They have the ability to mimic the voices of humans and they can sound as if they are talking just like humans. These birds are noisy and lively, and make noises every time they fly a few feet.

The blue spix macaw is an endangered species, almost bring extinct. They are no longer found in the wild because of the loss of their habitat, the illegal trading of pets and due to persecution. These birds were initially found in a range that is restricted, and with the Caraiba woodlands being destroyed, it meant that the birds were almost completely lost. They also face many threats from people who capture them for illegal pet trade. The number of blue spix macaws left today are about 110, and they are in captivity. The blue spix macaw population is so low that these species are classified as critically endangered species.

The blue spix macaw is a bird that is going extinct. If you were looking to have one of these birds as your pet them you’re not in luck. It’s simply not possible. These birds are critically endangered species and the priority right now is to save the species for the future. We have to consider the negative effects of deforestation on our animal species, specifically our birds. The only macaws left today are in captivity, as conservation efforts are underway. We can only hope that these unique birds do not go completely extinct.