The Blue throated macaw is one of the rarest birds in the world today. The scientific name for this bird is Ara glaucogularis. The Spanish name for this species is paraba barba azul, which means the blue beaded macaw. It is a bird that at one time was thought to have been extinct. However, a blue throated macaw population of about 50 macaws was discovered in the northeastern part of Bolivia in 1992. This group was found within the palm trees that are above the seasonally flooded plains of the Beni savanna. The species has gradually increased in number as conservation measures have been put in place through several programs.

The Blue throated macaw has underparts that are turquoise blue in color. This is a bit dull compared to the color on their crown and brighter than the color that is on their rump. The underparts of this bird are mostly bright yellow in color and they have a vent that is pale blue. There is a bare patches of skin on the face of these birds, which is obscured by feather lines that are blue. These feather lines merge into the lower cheek and throat that is blue. There is a narrow yellow stripe that separates the feathers from the crown. Around the base of the birds’ large bill, there is also a part of bare skin that is pink. An adult Blue throated macaw has a length of 85 cm. It has a wingspan of about 90 to 100 cm and a weight of 750 to 900 grams. The bird can get to a top speed of 56 km/hr. when it is flying. 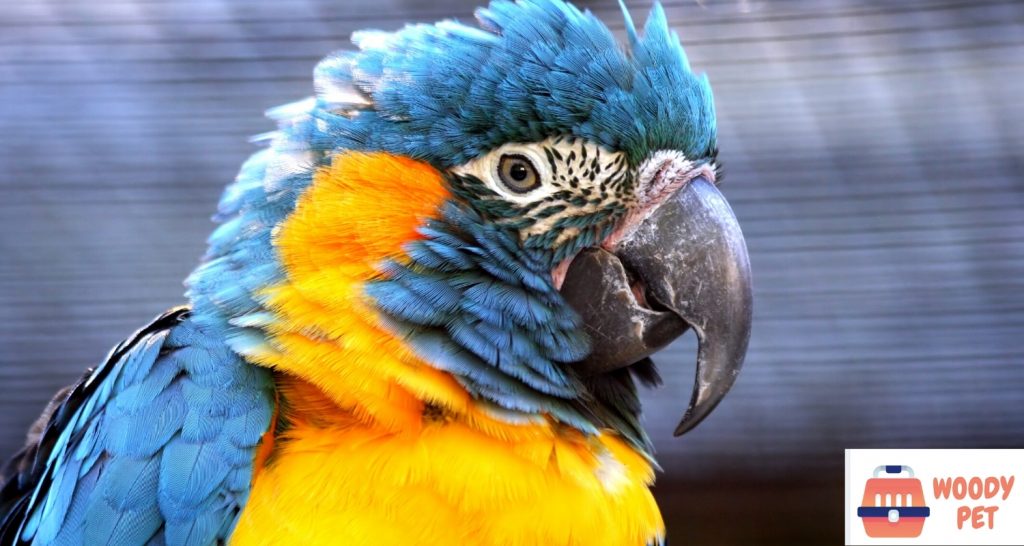 The Blue throated macaw habitat is found in a small area of north central Bolivia. This area is known as Llanos de Moxos. This is the only place where these birds are found. They live in forest islands, flooded savannas, tropical grasslands and in the corridors of forests along waterways.

These birds monogamous by nature. They form bonds that last a lifetime. They breed once a year but in cases where the nestlings or their eggs get lost, they produce another clutch in that same breeding season. The breeding age for blue throated macaws begins at about 5 years.

After a tree has died, it leaves a large grub that is hollow and it is in these cavities that the blue throated macaw nests. For each breeding season, the breeding pairs will go in search of new nesting sites as they do not reuse old nests. A female blue throated macaw lays about 1 to 3 eggs in a period, and incubates them for about 26 days. The chicks that are hatched have a weight of approximately 18 grams. The fledging period for nestlings is about 13 to 14 weeks but they still stay under the care of their parents until they are able to forage and take care of themselves. This can go on for about a year.

The blue throated macaw diet is a frugivorous diet. They mainly feed on fruits that come from large palms. They also feed on the mesocarp that comes from ripe fruit or fruit that is nearly ripe. They also drink liquids that are produced by immature fruits. Their strong beaks are adapted to feed on nuts and seeds, which they eat in addition to feeding on fruits.

The Blue throated macaw is a social bird. It mainly loves in groups and they often spend their time in pairs. These groups are made up of about 7 to 9 individuals and at times they may roost in groups of about 70 individuals. When flying in groups the pairs tend to fly close to each other.

These birds mainly locomote by flying, but they also have the ability to walk on the ground, climb trees and maneuver on branches. They often stay in one general area unless they have to move. The Blue throated macaw stays active mostly during the day as it searches for food.

The Blue throated macaw is a bird that communities mainly by producing sound. When they suspect that there is danger or when they feel threatened, these birds will emit a loud call that is alarming, right before they fly off. They often communicate with one another through quiet caws. They are intelligent birds and they have the ability to mimic the vocalizations of humans. They are also quite inquisitive and playful.

The Blue throated macaw have a small population and they are almost going extinct. There are various threats that these birds are facing such as predation, nesting competition, capture for pet trade, a small native range and indigenous hunting. The reason that these birds were highly targeted during hunting was for their feathers, which were used to make indigenous headdresses. The current population size of bye throated macaws is currently at about 250 to 300 individuals. Due to their small numbers, they are classified as critically endangered species.

The Blue throated macaw is a beautiful bird. They are still plenty in captivity but they are quickly diminishing in number. These birds are critically endangered and measured have been put in place to protect them and ensure that they are being conserved. Poaching of these birds for illegal trade is one of the major threats that have affected their population. The 2007 Europe ban on the importation of wild birds and different polices on the conservation of birds have helped reduce this threat. More countries are prohibiting the trade of this bird. This bird has a lifespan of 50 to 80 years, which depends on their overall health. It is one of the most interesting birds you can learn about.