Can goldfish live in a bowl? It’s actually a misunderstanding

You have probably seen it before: The golden fish swimming around in a round, little fish bowl. It always looks happy in movies, TV series and comics.

It is one of the staples on how you should maintain a fish (alongside to winning them in fairs and parks) and a beautiful way to display it and show it to others. But the thing is, we can be doing it all wrong.

A fish bowl is debated as not a good place to have any kind of fish, including the precious goldfish. It can be like a little prison and it can be detrimental to the grow of the little fish. And when shared with other fish, it can actually generate a problem that can result in health issues for the fish involved.

So then, can goldfish live in a bowl? Let’s find out if this particular situation it’s any good or totally a bad idea.

Can goldfish live inside a bowl? 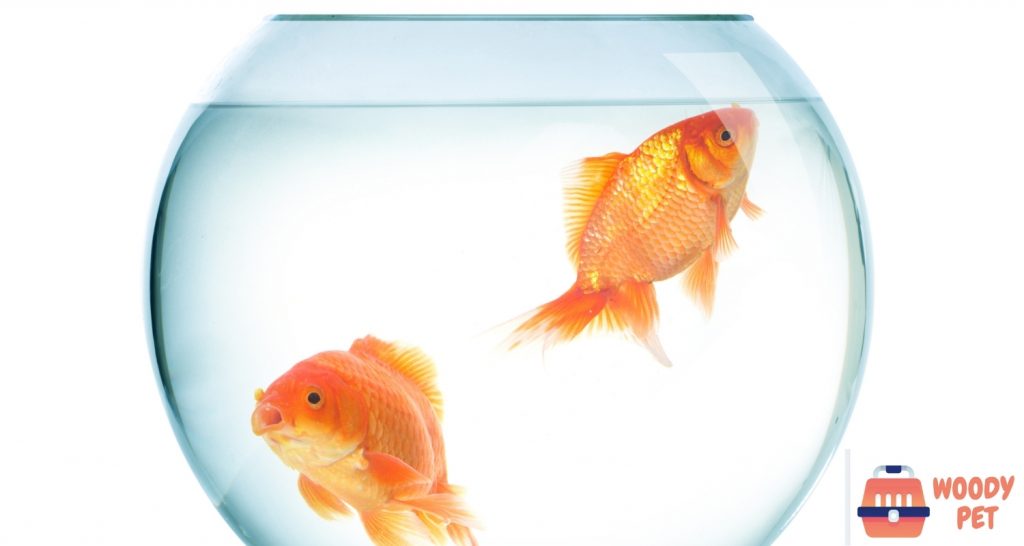 The short answer for that is yes, they can live inside a bowl. But obviously the answer can be more complex than that.

The fish bowls are not like “little prisons” (well, in a particular sense, they are because the goldfish are not swimming in like a river or something. Same thing as bird cages for instance. It’s subjective) They won’t stop the goldfish from growing to adulthood but it can limit the grow to its maximum length.

The issue with fish bowl is people thinking that they are restrictive for fish to get clean air and water, but a fish tank and even a pond can be as dirty for a fish as a fish bowl, but in a larger scale.

You can have a goldfish to grow to his adulthood in a well filtered and water treated fish bowl the same way you can do it with fish tanks and ponds. The only thing is having too many goldfish inside one or completely disregard for regular cleaning and maintenance.

Can goldfish get too big for a bowl?

But mainly, the goldfish can limit its grow according to the space they are in. That’s why you can get a common goldfish to be 18-inch long in the wild or a pond, but the same fancy of goldfish be up to 5 inches inside a bowl.

It can also depend in its environment. The water quality, the quantity of oxygen in the water and the cleanliness. The presence of chemicals that can alter the PH of the water. The temperature being too hot or too cold, or a safe middle ground. There are many variables that can alter the growth of a goldfish.

Can goldfish live long in a bowl?

As said before, the lifespan of a goldfish is determined by a number of factors and conditions that need to be met in order to assure a nice quality of life for our little fish.

Having a goldfish inside a bowl does not inherently mean that it can not live longer that one inside of a fish tank or a pond. It is just a container that needs to be treated like any other. The only difference is just size and form.

For a fish of any type or fancy to be able to live longer in any environment you just need to ensure that the water quality, oxygenation and temperature are correct or within the limits.

Can goldfish live in a bowl? Funny story: The longer living goldfish in history, Tish, was very well maintained inside a fish bowl for more than 40 years! Your typical dog, cat or canary can’t go that high! So basically yes, goldfish can live long in a bowl, only if every factor and condition are considered and met.

Can a goldfish get stunted in a bowl?

Stunting is a process where a goldfish would stop growing and this can happen by a multitude of reasons. Mostly environmental factors and sometimes even dictated by genetics.

Can a goldfish get stunted in a bowl? Definitely. But it does not necessarily mean it is because of the fish bowl space.

As said before, the water quality can be a factor in the growth of goldfish. Too much ammonia and nitrites can limit even the life span of the little fish. Having a temperature too cold or too hot (and not an adequate temperature around 23° Celsius) can also affect the quality of life of a goldfish.

While having a tinier space like a fish bowl without any filtration and water conditioning whatsoever can definitely trigger this behavior on goldfish, that can also happen in a bigger container like a fish tank or even a pond.

With this in mind, you should be on top of making sure your goldfish receive the cleaner, treated and oxygenated water you can give to them to ensure a better lifespan, no matter what container it’s in.

Can goldfish live in a bowl conclusion

Yes, goldfish can live in a bowl. Even though they are some cities like Rome, Italy that banned fish bowls as home for fish, there are so many ways you can make a fish bowl a good home for you beloved goldfish.

It is not cruel if you consider that, with a good system filtrating and treating the water, without overcrowding any of the containers (fish bowls, fish tanks and ponds) and without making the fish to eat more than they actually need (because they can literally eat until they explode for some reason), you can actually prolong the life of your little goldfish even in a little fish bowl.

Remember this fact: The longest living goldfish, Tish, as recorded on the Guinness Book of World Records lived more than 40 years (43 years to be exact). There is not another home pet that can match that, not even close.