Can goldfish live with other fish? Sharing is caring, right?

There is something about sharing that is always a good thing. You can have someone to rely on, someone with which you can play along, go out to eat and basically enjoy life in a far better way that you can do when you are alone (but that doesn’t mean loner can have also a happy life too)

When talking about animals, you can also see they share. When the wolf has their pack to hunt and to travel across places, birds when they are migrating, sardines when form those giant swarms to deter predators… There are many examples in nature where animals can live together and form a great teamwork kind of situation.

And speaking of fishes, goldfish are some of the most sociable fishes in the world. So then, we need to ask: Can goldfish live with other fish? The answers to this and more questions coming up below.

Can goldfish live with other fish? 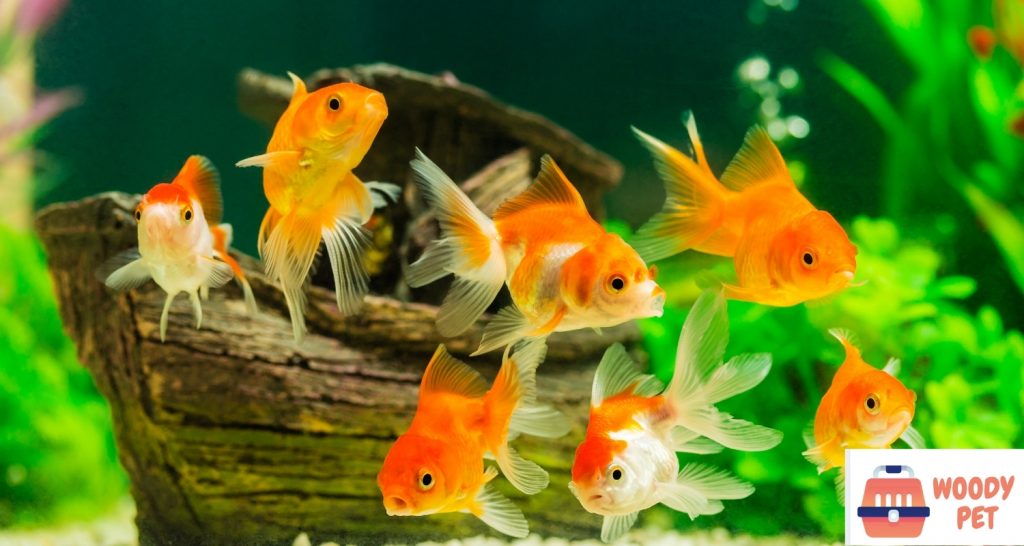 Can a goldfish live with other fishes?

Definitely. A goldfish can live with other fishes. But we need to get choosy and pick the other fishes, with special detail on their tails and other features.

Why the tails? Well, it is all because competition. A single tailed goldfish can be very competitive around food, swim really fast to get it and leave others without food for its survival. That is an unfair advantage, to say the least.

Other feature to take into account is if your goldfish have different eyes. A bubble eyed goldfish can’t see better than a common goldfish (and those common goldfish could actually leave them without any food left)

Do goldfish need other tank mates?

As said before, the goldfish are very social fish. You would say that goldfish would need other tank mates then.

As human beings and other animals, goldfish can feel lonely and can easily get stressed, depressed and eventually get sick for that loneliness. That also can qualify as cruel, but it’s subjective.

Having a good mate that can make some good company, that allows both to be feed and it is as friendly as the first, can guarantee a good, happy and peaceful life for your little pet.

You can just look at videos in the Internet where you may watch goldfish in ponds and fish tanks swimming together, especially when the time to eat gets closer. And in the wild, this can even be demonstrated when they form shoals to move from place to place and to deter predators from attack them.

What fish aren’t good to live with goldfish?

As goldfish can live with other fish, there are however many fish that aren’t good to live with them.

Either be by their sizes, their behavior against other species, their different requirements or just to not be compatible at all, there are some fishes you should avoid if you want to have relative peace of mind in your fish tank or pond.

These are some examples of fish that can’t be around as tank mates for goldfish: Common plecos, ghost shrimp, pumpkinseeds, cichlids, red shiners, banded sharks, all freshwater sharks, bluegills and bloodfin tetra. While they are not the only ones that can’t be paired in the same fish tank as goldfish, there are so many other species that can’t share the same space.

What tank mates are good to live with goldfish?

Now, let’s flip to the positive side of the coin and learn what tank mates are good to live with goldfish.

There are so many species of aquatic creatures that can live alongside of your precious goldfish because they share the same temperature and food requirements, they are not overly territorial, they won’t attack and nib the little fins of your goldfish and, as a bonus, can actually clean the environment while being in there.

So then, some of those amazing companions for your little goldfish are: Snails (they can eat algae better than plecos), newts (the remaining uneaten food in the tank is not issue for them), bamboo shrimps (they are big enough that are the only ones goldfish can’t eat and clean the environment), butterfly loach (again, one of those awesome creatures that can help cleaning scraps on the tank), the white cloud minnows (fast enough that can’t be eaten by goldfish) and the weather loach or dojo loach.

Can koi live with goldfish?

The koi fish can live with goldfish. They share many similarities and can be a good partner for a pond environment. The thing you need to have in mind is space and the sizes of both fishes.

While both the koi and the goldfish come from the same carp species, they have some differences, in color especially. However, they can live together and even breed with the goldfish.

When the fry (baby fish) are born is when the problems can start. Goldfish would not have any issues on eating the fry and the eggs, so you would need to be on top of that.

Another issue is the size. If any of the fishes can fit into one of the mouths, it’s game over for it. You would need to be vigilant in this case as well.

Can goldfish live with other fish conclusion

In a few words: Yes, the goldfish can live with other fish but, as you may noticed it, it is not that simple. Not an exact science at all.

Basically, what you would need is other goldfish similar in size of what you have, or other species that don’t interfere that much with your little goldfish. Avoid the ones that nib your goldfish fins and you are golden.

You need to consider giving them a nice environment that complies with their temperature requirements, food requirements (please, do not overfeed them. It is not necessary) and overall cleanliness of the water.

Also, a good point is to not overcrowd your containers. It can be a fish tank or a pond but having too many fish in there can make the habitat a bit hostile, can limit the quality of the water and oxygen and can stress the heck out of all your little pets.