Contents hide
Can horses vomit? A strange but valid question
Horses cannot vomit
Is it dangerous?
Horse vomiting through nose? Here is why.
What animals can’t vomit?
Can horses vomit conclusion

Can horses vomit? A strange but valid question

Vomiting is a mechanism that is important for many species to survive. It is a forceful way that the body ejects substances that are toxic and that are disturbing your stomach. We have seen it in humans where a bit too much of food or eating something that just does not so well with your stomach makes one vomit. A person may also vomit simply because they are unwell.  In nature however, there are actually animals that cannot vomit. There animals simply do not have the capabilities in their system that would allow them to vomit.

So can horses vomit? Well, it is almost impossible for a horse to vomit. As much as this may be a gross topic, it is important to understand how a horse’s mechanism works especially if you’re planning on owning one. Now that you know that horses cannot vomit, you may wonder what the reason behind this fact is. Read more to find out! 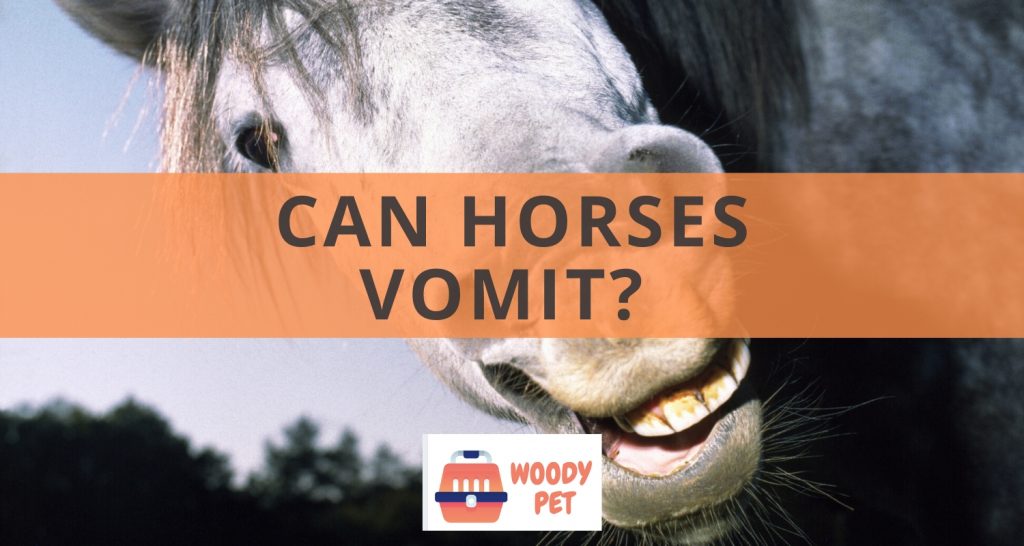 Vomiting for a horse is not a common occurrence. There is a long soft palate in horses that acts as a valve. Together with the sphincter, this valve prevents food from going into the trachea and also prevents the esophagus from getting air. Horses cannot vomit because this valve cannot open under pressure that is backward, coming from the stomach. The muscles in a horse that make this sphincter are far much stronger compared to those of other animals. This means that the valve will not open for food in the stomach to go back up the esophagus. When a horse eats food, the valve relaxes which allows food to go through and enter the stomach. When the stomach of the horse becomes bloated with either gas or food, the horse’s stomach presses against the valve which causes it to involuntarily close tightly such that nothing escapes.

Though this may seem as a failure in the system of the horse, it is actually a mechanism in the design of horses. Horses often move in a manner that applies great pressure to their stomachs when they run. For most animals in nature, this would cause them to vomit, but for horses that prevents it from occurring. It makes them able to run as much as they can without throwing up and also helps them when they are under the sun for long hours while grazing.

Now that we have the answer to the question, “Can horses vomit?” let’s look at its implications. Many animals vomit as a defense mechanism that is more than often very useful. Since horses cannot eject harmful substances by vomiting, it creates a problem. The toxic substances remain inside the body which can be very harmful for the horse.

On very rare occasions, a horse may vomit when its stomach gets severely bloated with either gas or food. At this moment if it gets slightly stretched, the valve may be eradicated and the abdominal muscles contracting will put pressure on the stomach. The result of this extreme pressure will cause the horse to vomit. Sometimes, the extreme pressure will cause the stomach walls of the horse to rupture but in very slim cases is the horse able to vomit and still remain normal afterwards. Rupturing of stomach walls for a horse is fatal for a horse

Horse vomiting through nose? Here is why.

Your horse is in distress and there is some liquid coming out of you horses nostrils. Is your horse vomiting through the nose? Well no, it’s not. When you see a horse that is in such a condition, it means that it may be unable to swallow its food or that the esophagus of the horse is blocked. The first thing that you should do in such a situation is to call the vet immediately and keep the horse calm as you wait. The vet should help you deal with the situation in a manner that ensures your horse is safe.

If you were not aware that it is impossible for a horse to vomit, then you must be curious about what animals can’t vomit. These animals cannot vomit because their body mechanisms do not allow them to. Some other animals that also cannot vomit are rabbits and rats. Just like horses, rats also have a valve that is between the stomach and the esophagus that prevents the food from the stomach from moving backwards. That is a reason why poison works so effectively on them.

For rabbits, they also are not capable of vomiting which causes issues for them as they keep on ingesting fur. Frogs also cannot vomit but have the most interesting way of getting rid of toxins from their body. When a frog eats something that is toxic, they throw up their entire stomach by wiping off the harmful stuff from the stomach and putting the stomach back in the body just as it was. That’s strange, right? Horses are just one of these animals that might be considered disadvantaged as they lack the ability to vomit.

It is odd to think of the capability to vomit as something that is good. We may have has bad experiences vomiting and just the mere sight of vomit may not be pleasing to the eye. But as we have seen, vomiting may actually be a good thing as it allows us to eject toxic substances that may have otherwise been harmful to our bodies. One would not think that there are animals in nature that do not have this ability that we often take for granted. Animals such as horses do not have the option to vomit, and from the danger that might come with the experience, it is hoped that they do not come into a situation where they have to. Now that you know everything about horses and throwing up, the next time someone asks you “Can horses vomit” you have all it takes to give them a lesson or two.