Can Spiders Eat Fruit? Probably they can

In the world, there are so many species of animals that we can call fructivores, or those that can enjoy the flavor of a fruit juice or the entire fruit itself as their main food to sustain their lives’ requirements of nutrients and energy.

Fruits are the way from some angiosperms (or plants with flowers that produce seeds) to multiply and reproduce, but they also can be part of some animals’ diet. The edible ones could also give many nutrients and could be great for hydration because of their high content of water in them.

So, you may be asking: But can spiders eat fruit? After all, they are also animals that are omnivores (the ones that can eat almost anything) Let’s see with some question and if they are, in fact, able to eat fruit like some other species of animals, or if they are only strictly hunter that eat meat.

It was a known fact that most (if not all) species of our arachnid friends only just eat meat (or at least the juices inside the said prey), but it was discovered fairly recently that some species of spiders do eat veggies.

A study from some universities from the UK, Switzerland and the United States discovered that some species of spiders do eat veggies, and the species mostly found eating greens are the jumping spiders.

The biggest group that likes a veggie meal once in a while is Salticidae, a family of jumping spiders with over 5,000 species spread across the entire world, characterized by the pair of big, shiny eyes at the front of their heads. Salticidae accounted for 60 percent of the documented plant-eating incidents.

One of the investigators said in an interview that “The ability of spiders to derive nutrients from plants is broadening the food base of these animals; this might be a survival mechanism helping spiders to stay alive during periods when insects are scarce”. Additionally, “diversifying their diet with plant is advantageous from a nutritional point of view, since diet mixing is optimizing nutrient intake.”

However, when it comes to what the plants can offer to the nature, like leaves, flowers and fruits, could be a little be different in if spiders can eat fruits, or leaves, or whatever.

Although, there is one type of spiders from Mexico and other countries of Central America which feeding is based mostly (if not only) of an herbivorous diet. This is a species of jumping spider and it is know to be the only one to have this kind of diet. 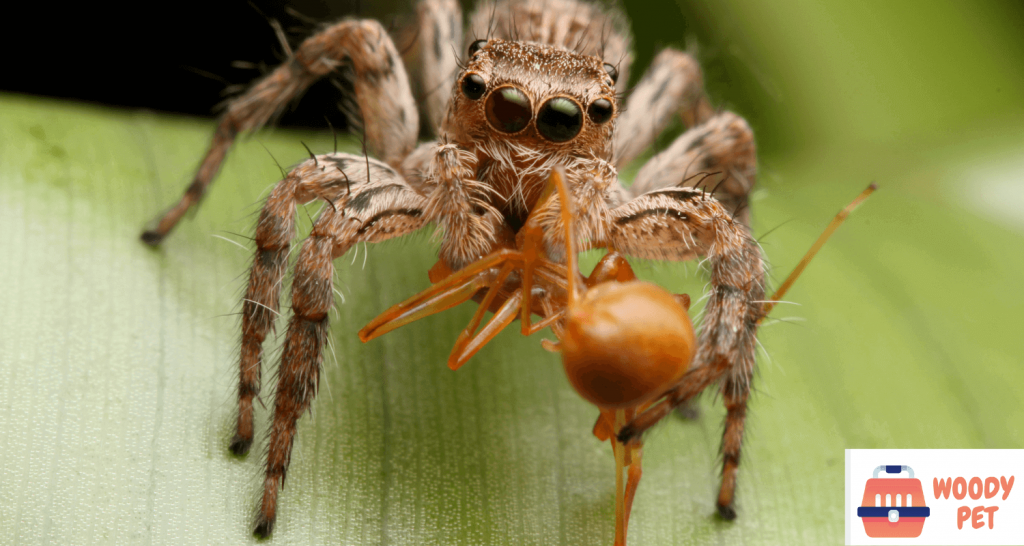 Mostly in what the above investigation says, some species of spiders do eat leaves from time to time.

Although this is a behavior in some species of spiders, that alone does not say that spiders actually chew and nibble the leaves as toothed animals or herbivores would do.

What spiders can do with leaves, pollen and other parts of the plant is to extract the juice from them or, in the case of some of those particles getting caught in their webs, the possibility of being eaten while the spider starts to eat their own webs.

That last behavior alone can actually provide with some good nutrients like calories from the pollen getting stuck in the web. And because the spiders are actually good recycler creatures, they can eat their own webs to get some energy and nutrients back.

In short answer: No. They do not eat fruit. In a more elaborate way: No, because it is not like they can chew the fruit like most animals would do, but they probably can suck the internal juice from a fruit, just like some species of spiders would do while extracting nectar from some flowers or the sap from a particular tree… Or even the liquids from an insect, toads, birds or fish, as they commonly do.

So, basically, the spiders can’t chew the pulp of a fruit and digest it normally like others animals would do, though they could get the juice from inside those fruits to get hydrated or to get more nutrients and energy.

In the world exists a well-known species of spiders that mostly (if not entirely) have a diet that is based of just vegetarian food. It is the Bagheera kiplingi, a species of spiders which diet is basically vegetarian only, being the only one in the entire world that is know to have a marked herbivorous diet.

For the Bagheera kiplingi spiders, the Beltian bodies are a delight. They would try to avoid fights to ants guarding said Beltian bodies, that are rich in lipids, sugars and proteins. The spiders mostly feed from these parts of the acacia’s trees and, from time to time, also consume nectar and occasionally steal ant larvae from passing worker ants for food, meaning that they are not totally herbivores but also carnivores.

When talking about if spiders can eat fruit, the answer is a simple no. But that does not mean the spiders can’t get some nutrients from these or other parts of a plant, without actually nibbing or chewing said parts.

Spiders are mostly known to be carnivorous meaning they would mostly eat meat from animals like insects, toads, birds and fish (the last three are almost incredible to believe, but some species can actually catch fish!) but there is an exception of this rule.

The Bagheera kiplingi is a species of spider that is mostly found in Central America, in countries like Mexico and Guatemala, where those little spiders can have a diet mostly herbivorous. They eat from the Beltian bodies from the leaves of the acacia trees, while trying to avoid confrontation and disturbance of the ants that make some type of symbiosis with those parts of the tree.