Contents hide
Probably not,
Can spiders be vegetarian?
Are spiders carnivorous?
Can spiders eat food from humans?
Conclusion

When it comes to humans, we are omnivore creatures, capable of eating almost anything in the world and digest it. Some humans that have pets believe that some of their pets can also do this action, even though it can be actually bad for some kind of animals.

Now, speaking about spiders: Can spiders eat human food? These creatures with eight legs could have some interesting diets that we will be looking into. Let’s see if they can eat the same as we can do, and other related questions in search for an answer. It can be way different than you may think it can.

Can spiders be vegetarian?

Starting with some of the human food, and part of the answer to can spiders eat human food? Let’s start with the greener type of food that exists in the world.

So then, can spiders be vegetarian. The short answer for that could be a massive yes, with a catch. It is well known that spiders are carnivores’ type of animals, even though their diet is not precisely meat per se.

Spiders catch their prey and use their “jaws” or chelicerae to inject a venom with their fangs. The venom would make the internals of that prey a liquid that spiders can drink, because they can’t chew food as other toothed animals would normally do. They prefer the straw approach, so to speak.

But it was discovered recently that some species of spiders, more specifically the jumping spider of the scientific name Bagheera Kiplingi (honoring Rudyard Kipling, the author of the book The Jungle Book in which Bagheera is the name of the black panther), that have a diet based on mostly Beltian bodies from the acacia trees. There is not any other known species of spider that have this marked herbivorous diet in the world, at least for now. 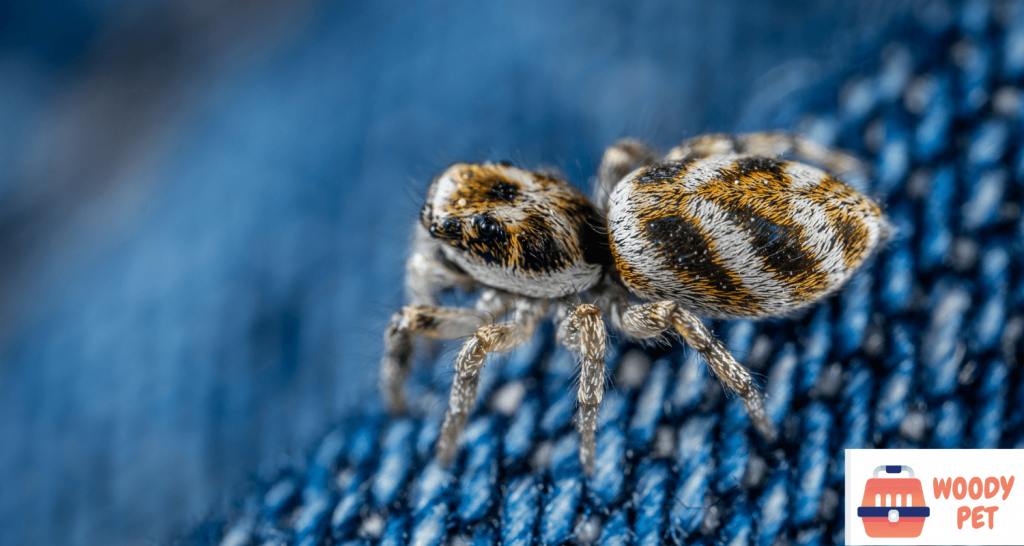 It could be a silly question if you do not put too much thought into it but yes, spiders are carnivorous… Although this is not your particular kind of carnivorous animal.

Remember that spiders have those chelicerae or “jaws” (yes, with some quotations marks) where they have their fangs with venom, to inject into their unfortunate prey. Those things however, do not work like they were teeth or something like that. Instead, they apply venom to immobilize their prey and to liquify their internals in order to drink them later. Quite nasty you may think, but the only way to ensure their survival.

Spiders are one of the most essential carnivorous groups of animals on the planet. Without spiders, insects would reach pest proportions throughout the entire world and cause massive ecosystem imbalances. And, as you know, things in balance are always a good thing.

Based alone on the previous, no. The spiders can’t eat human food because they do not have teeth or a proper digestive system to deal with these kinds of food. Although, if they encounter water, they could use their mouth to hydrate themselves, in a similar fashion that when they suck the liquified internal of a victim prey (yuck!)

Can spiders eat food from humans?

So, after reading the previous answer, you would think that spider can’t eat food from humans, right? You would be sure that is the case for all kinds of spiders.

You may think then if that is the case, what can a human that has a spider as a pet give to feed it? And the answer would be most likely crickets, grasshoppers and similar insects they can eat. Most of them are sold in pet stores and some can be catch in the wild, with the added risk of carrying parasites.

There have been studies to show that some spiders will eat various forms of human food. This includes egg yolk, sausage, and even marmalade.

Giving spiders bread or similar kinds of food they can’t process though would end in the animal rejecting to eat said food or worse, eating it and having complications because they can’t actually process those things.

And speaking of having spiders as a pet, you should be careful in which kinds or species of spiders you get in the wild. All of them are venomous, but some are actually dangerous for humans when they bite. If you do not know which kind of spider is the one you have found, always ask to a professional and also, try not disturb them in the first place.

While they can eat insects, pollen, their own webs, some frogs, some small fish and other prey which internals can be converted into liquid, spiders can’t eat human food.

The main reason why is because they do not have teeth to actually chew and make their prey into more easily digestible food. And speaking of digestible, the spiders’ digestive systems can’t actually process solids like limbs or other parts of a caught prey.

The way they eat is by injecting venom to paralyze their victims and then an enzyme that would liquify the internals of said prey. Then, it should be really easy for the spiders to just suck on that juice from inside their prey, leaving just an empty carcass behind (that can be used by other animals searching for food, continuing the food cycle)

The spiders are an important part of the control of insects in most environments and thus can be used to control pests. That’s why is not always a good idea to kill them, unless they are venomous enough to harm you in some way (in which case, other methods apply)