Can Spiders Retract Their Webs?

They can make mistakes

The spider webs. Those safe havens where most spiders make their life. The indispensable tool they need to catch flies and other insects to feed themselves. Also, a way to know if a place in your home is not as cared as other places and you should clean it.

You probably have watched a story of a kid bitten by a spider and after that started to sling some webs here and there, becoming a superhero in the process. But in the real world, apart from some bites from some spiders being venomous enough to cause harm, spider webs are pretty much something else that is so important in the life of these eight-legged creatures.

Contents hide
They can make mistakes
How spiders build their webs?
Why spiders eat their webs?
Can spiders go on spinning webs?
Conclusion

Coming up, we will see if spiders can retract their webs, when doing a mistake while building them or if it is something that is actually very precise that they do not make mistakes at all.

How spiders build their webs?

You probably have seen them, spider webs around the corners or less transited parts of your house or other places you go. But the question always lingers: How spiders build their webs?

Spiders generally use up to 4 types of the same of silk, with different features and characteristics. The first one is the major ampullate silk, that is used to give structural stability and used to drag exterior lines. The second one, the minor ampullate silk, is used as an auxiliary silk to the spider walk in the middle of the web.

The third type of silk used by spider is the capture silk and this one is self-explanatory itself. This one is the sticky one, the one used to capture insects and other particles that spiders could feed on. The capture silk has nodules that contain water and sticky glycoproteins that make the escape very difficult for an insect.

Finally, the fourth one is the piriform silk. This one is used as the basis of the entire web. You could think of it like the concrete foundations on a building.

Spiders that build large, spanning webs, as orb weavers do, start construction of their webs by releasing a long strand of silk. Once it clasps onto a tree, bush or rock, the spider stiffens the thread, thus creating the first segment, named the bridge line. The spider can then travel back and forth across this segment, attaching extra strands to it. After making the majority of the web, the spider puts a sticky strand in a spiral shape across the center of the web, which serves to capture prey.

Other spiders build differently shaped webs, taking the form of sheets or funnels. As silk pours from the spinnerets, spiders manipulate it with their legs. The best kind of spiders that do the very stereotypical spider webs are the orb weaving spiders.

Sometimes during the construction, the spider can also retract their webs in a way by eating the silk. Yes, they can also make mistakes but there are reasons for that to happen.

Why spiders eat their webs? 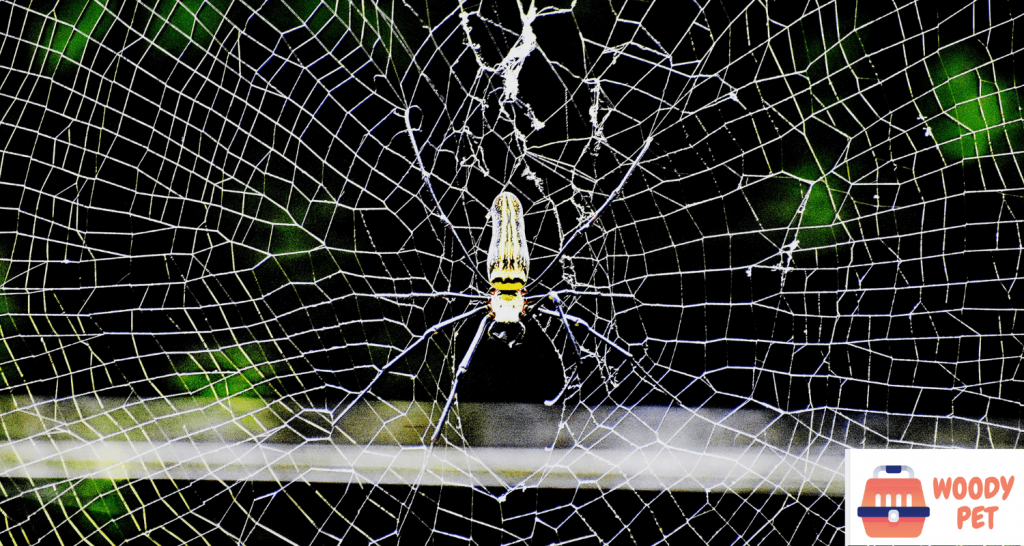 As mentioned before, spiders can retract their webs not by getting it inside their bodies the same way they come out, but by eating the silk itself. But why spiders eat their webs?

Spiders’ spinnerets make the silk on the fly, so they don’t work in reverse. The only way to “recycle” the already used webs is by eating the silk directly.

The silk of a spider web is a source of some proteins and other nutrients that could also get stuck into the sticky ones (like pollen, rich on lipids and sugars)

Can spiders go on spinning webs?

Spiders can go on spinning webs by eating them. Remember, since spider’s silk is made of protein, all this web weaving requires large quantities of protein.

The orb weavers, the kind of spiders that make those very well-known circular spider webs, know that, because those webs are made often in places with high traffic, a damaged web is most likely to occur.

However, even when the web is not damaged at all, the orb weaver’s species of spiders would eat their silk and made a new around the evening of every single day. That’s why they can retract their webs, but not in the expected way.

The protein from the previous silk is not ever lost. From the spider’s digestive system, it goes to the silk glands to be made into a new web. Even if a spider misses a few meals, it can still go on spinning webs. This is thanks to the efficient recycling program that lets spiders preserve protein by eating old webs.

This is quite great for said type of spiders because if they do not catch anything around in the day, they could just ingest their own webs to recover some of that energy and nutrients from the silk of the previous web, and start over again. It is the best kind of recycling that nature can show us, in a very tiny creature that makes some real art pieces, even though they are for just catching unsuspecting insects.

While most mistakes in life can be retracted to make it the good way, for spiders it is mostly because of survival. Spiders can retract their webs by eating them and starting them all over again.

This is mostly seen while the webs are in construction. The first strand of silk is put in a way where the air would probably move it to its intended position which then can be tightened by the spider in the other side.

However, that does not always happen and so, the spider would eat the silk and try again. This process can give proteins and other nutrients back to a hungry spider. Remember, because they are using nutrients from their own bodies, spiders are actually taking a gamble.

And speaking of recycling, spiders are pretty good recyclers by doing these actions. Some of them can do impressive feats of art by doing rather cool designs of webs, just to catch their food.