Color. The main feature we love about this world and that we are able to appreciate because of our eyes. So many different shades of various colors, that can give us a glimpse of other features like temperature (like when something is red hot or if it is cool blue)

Many other things can tell us some information like traffic signals. Green ones would give us info, while red and white ones tell us that we should obey what they are saying and yellow and black ones that advise us about some risks on the road.

For animals, color can be an unknown feature of the world (even when they are colorful themselves) but for some lucky ones like spiders, they could see way more of the world because of their eyesight and their ability to see color. Let’s find out if spiders can see color as well.

How the spider’s eyes work?

Starting with the basic and probably the main reason why the spiders can look so scary (apart from their eight legs and the possibility of some to kill with their venom) are their four pairs of eyes, for the majority of spiders. But how the spider’s eyes work?

The main ones are of the type called pigment-cup ocelli, able to detect from where the light comes but are also capable of displaying images.

Secondary eyes are used to detect motion and even measure how dark a place is. These eyes can help the spiders see when there’s little light. The wolf spider’s eyes are amazing at this. On the other hand, the jumping spider operates during the day and so, its secondary eyes do not possess this ability.

Some jumping spiders’ eyesight is impressive. They can have as good of a vision like dragonflies have, the best vision amongst insects. There are some sites that claim that human vision is only five times better than the one on these spiders.

There are certain species of spiders that, unlike their 8-eyed cousins, have 6 or fewer eyes. In 2012, scientists discovered the Sinopoda Scurionin Laos. It’s a spider that lives exclusively in dark caves and has no eyes. This goes to show that spiders don’t rely on vision in the same way humans do.

But when it comes to color, the things vary a little bit.

Do spiders see in color? 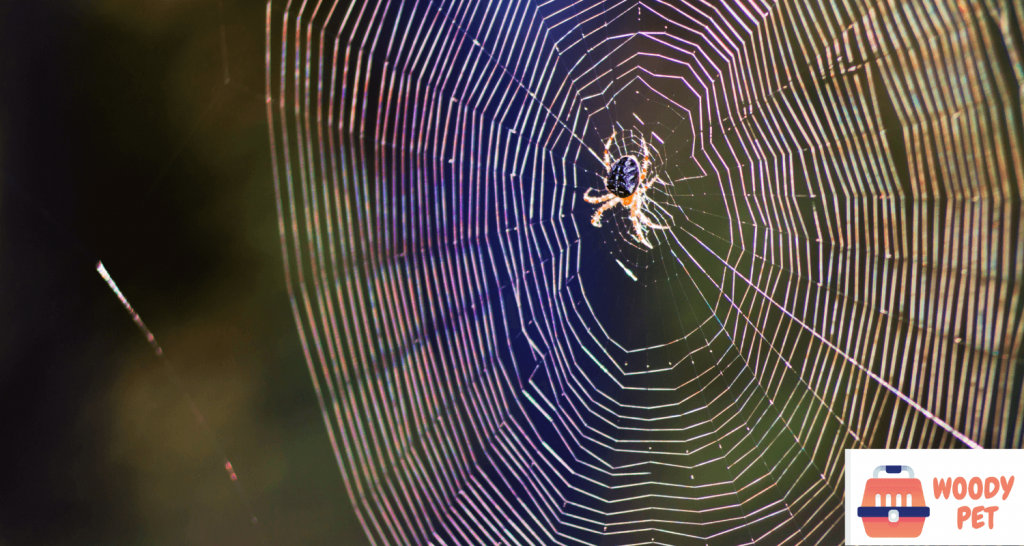 Not all spiders are created equal, and when it comes to color and eyesight, spiders are definitely not the same. So, can spiders see color?

The general answer for this is yes, the spiders do see in color, but it depends on the species of spider and whether they have or not eyes that specialize on color.

The true is, mostly every species of spider can see color, but with some limitations or with better improvements and features.

Some like the jumping spiders, the most common type of spider there is. Some of their eyes are capable to capture most colors of the light spectrum while the others capture motion and some details. Upon closer inspection, it turns out that jumping spiders possess eyes that can detect green, red, orange and yellow by utilizing filters inside the eyes’ retinas. These filters grant them true trichromatic vision, like humans.

Some species can also see ultraviolet light, the type of light humans can’t actually see by themselves (we would need to use tools to measure it). This particular species is unique (as far as we know) in that they can see pretty much the same colors we can, in addition to UV light.

Can spiders see in the dark?

Most spider species may not be able to use their eyes for many things but are they capable of using them in the dark? After all, they hunt in the dark, so it’s only logical for their eyes to have some form of night-vision capabilities.

The truth is, most kinds of spiders cannot use their eyes in the dark effectively. With some notable exceptions, most spiders have rather poor eyesight, even in the brightest of environments. Such small eyes cannot filter the world as our eyes do and so spiders have developed other methods for gathering information about their surroundings.

There is one particular kind of spider that not only has great eyesight but can even locate its prey in the darkest of places, unlike many of its spider cousins. Wolf spiders, members of the Lycosidae family, use their long legs to pounce on top of their victims and devour them.

Their eyes are excellent at absorbing light. So much so that if you suspect a wolf spider is hiding in the dark, you can use a flashlight to spot them, their eyes will reflect the light you shine back at you, if they happen to be looking at you. These are some of the spiders that can see color too.

If we are looking for an answer to can spiders see in color, it can be as simple as: Yes, they can. And that alone gives them an advantage over some other predators.

The vision of a spider is not as clear as human’s but it is quite acute compared to other insects and animals and it has the ability to detect motion, color, depth and even ultraviolet light. There are some spiders like the wolf spider that can bounce back the light they receive in their eyes, because of a component in their eyes that allows them to do so.

Spiders can generally have up to 4 pairs of eyes (eight eyes) but some could not have none at all, which may us think that they use other senses to get what they want in the dark environment they live in. In all, they are some impressive creatures when it comes to vision.