Adaptation in the Ecosystem: Can Spiders Sense Danger?

For an organism that is crawly, calm and usually on its own, you may want to ask the question, can spiders sense dangers? The answer is yes, spiders are able to sense dangers that are around it in its surrounding or habitat quickly and it then acts quickly to protect itself against these dangers in the best ways it can.

By now, you are aware that one of the better attributes of Spider Man is to be able to sense danger even before it arrives, and we can definitely tell you that Peter Parker got this unique gift from spider itself. One of the most important adaptation and survival techniques that a spider uses in defending itself and staying out of danger in the ecosystem is its ability to sense danger around it, and it is able to do this through its unique and highly developed sensory organs. Now, let us look at how a spider is able to sense danger and use this knowledge to protect itself and survive within its natural habitat.

Spiders Have a Unique and Well Developed Vision

One of the best attributes that a spider uses to sense danger is its unique and well developed vision. Studies have confirmed that spiders, especially the jumping spiders have the most developed and functioning vision in the arachnids family. This amazing vision allows them to quickly detect dangers from afar and quickly react to it. Most spiders have multiple eyes, some even have both anterior and rear eyes and this means they can easily spot any danger coming from a very far distance away. A spider just needs to take a look, and it will be able to see what is coming around it, and this is not just limited to an illuminated space, as some spiders are still able to see clearly in the dark. This vision helps them greatly in sensing dangers and acting accordingly to avoid the dangers. Spider’s unique vision also helps them in  being a great predator, as they are able to see the insects around them and quickly trap them into their webs and feed on them. When a spider senses danger, it can easily hibernate, and protect itself from predators coming its way, while it also uses this strategy to serve as a predator by preying on its targets.

Spiders Can Hear from a Distance 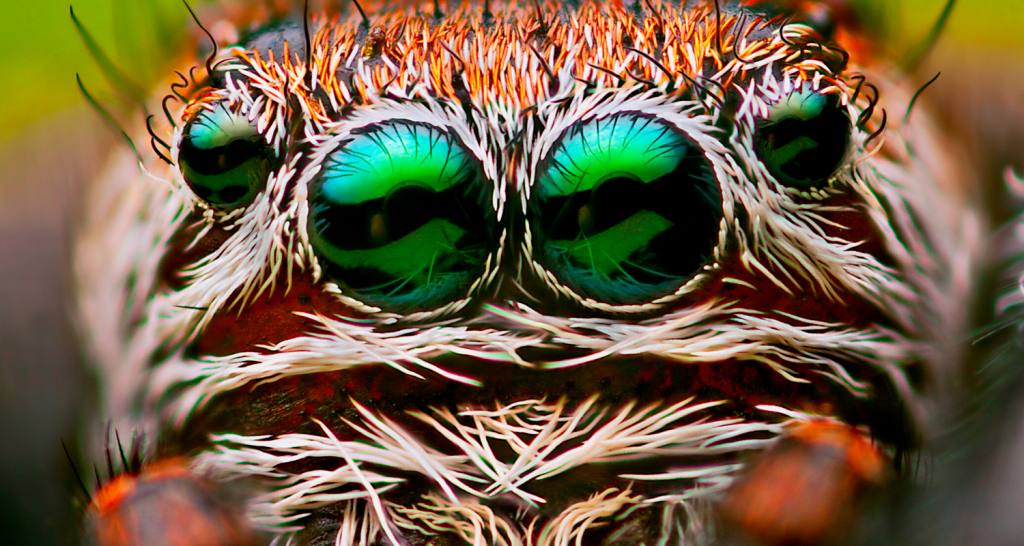 Spiders are one of the most sensitive organisms around and one of their more pronounced senses is the hearing senses. As a matter of fact, spiders are able to hear and detect sounds from more than one sensory organ, including the hair and the legs. They pick up sound waves and vibrations from as far as five meters away from them, and this means a spider can hear the sound of claps, dragging, movement or any other sound from the next room, which is amazing for such a small organism. As a result of this highly developed hearing system, spiders are able to quickly detect dangers from faraway and move away or hibernate in order to avoid the danger. For instance, if a predator is five meters away from a spider, it already knows as it would pick the sounds or vibrations through its hair or legs, and this means it can easily protect itself. The spider counts on this ability very much in order to protect itself from predators while in its natural habitat, and it is one the reasons why it is able to survive easily even in the face of constant dangers.

Spiders Uses their Web to Detect and Sense Dangers

Even before getting to know spider man, one of the first things you know about spiders is their webs and how it is their home as well as their defensive unit. If these are the two things you know about the spider web, then, you would need to learn a little bit more about the importance of these delicate but sophisticated webs and how they contribute a lot to ensuring the safety of spiders in their habitat. The web is no just a home for spiders, it is like a part of them, and if you have seen a spider within its web you would most likely be able to confirm this. Once a spider is in its web, it becomes a part of the web, and it instantly receives a stimulus should anything touch the web. Now, this was a strategy that was developed for getting its food, but it is also a defensive strategy as a spider would be able to feel the vibrations when a predator touches or comes around its web. The web would instantly send the message to the spider, and it would be able to make the right safety decision. One of the things that contribute to this is the fact that the spider is able to detect the magnitude of the vibrations that comes in contact with its web. In most cases, the higher the magnitude, the larger the size of the organism that comes in contact with it, and this would allow the spider to decipher between a prey and a predator in other to make the right judgment at all times.

Are Spiders Able to Sense Humans?

Even if spiders are considered as pets in a lot of places, we still have to admit that humans remain one of the most common dangers to the existence of spiders. In some cultures, humans would rip down spider webs and hunt them down, and this begs the question, are spiders able to sense humans? The answer is yes. Spiders have well developed eyes and hearing senses like we have illustrated above and this means they can easily see humans or hear them coming towards them. Whether we can be sure that these spiders understands the intention of the humans coming towards them, which would determine if they would stay or run is another thing entirely.

So, can spiders sense danger? Yes, they are, as they are well endowed with properly developed sensory skills and this has hugely contributed to their survivals even in the face of many grave dangers in their habitat.