It seems as if spiders can do a whole lot of incredible things that you would not even expect them to be able to do. Even when their physical features don’t support it, you would probably find it interesting that a spider can hear, fly, taste, and even smell, among other things. Since it seems a spider can do virtually everything, it begs the question, can spiders swim?

You may be thinking spiders don’t have the features that would aid it in swimming, but you should remember it doesn’t have nose, and yet it can smell, it doesn’t have ears, yet it can hear, incredibly, a spider doesn’t have wings and it has been proven beyond doubts that they can fly higher than most birds and flying insects. There is no denying the fact that spiders are a group of organisms that have been able to make something out of nothing, and we are sure by now, you won’t be surprised if you were to find out that spiders are actually able to swim. So, let’s find out if indeed spiders are able to swim, or this is an area where they finally fall short.

Are Spiders Able to Swim?

The answer to this question is not straightforward. This is because, there are spiders that can swim and there are other species of spiders that are unable to swim. So, the answer is, yes, spiders can swim, but this swimming ability is restricted to a certain species of spiders. While spiders can swim, it is also important to say that most of the spiders that can swim are only able to swim in an open or unenclosed space, due to their low centre of gravity. Most spiders are unable to swim in enclosed spaces, and this probably would explain why spiders that are flushed down the drain would drown. However, there is also a family of spider that can swim in all spaces. In fact, the diving bell spider can live and survive under water.

What Types of Spiders Can Swim? 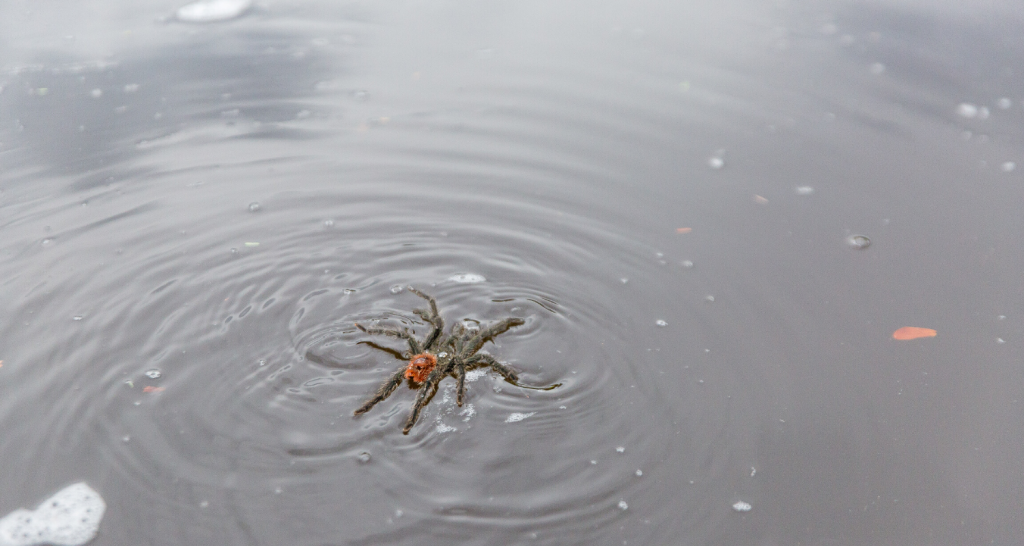 As we have said above, not all spiders can swim, as that privilege is reserved for a certain group of spiders. For the purpose of clarity, let’s quickly highlight some of the species of spiders that can swim.

Can a Spider Swim up the Toilet?

When spiders become a nuisance in our homes, one of the best ways a lot of people have deployed to get rid of them is to flush them down the toilet. In a case when you flush spiders down the toilet, should you worry that they would be able to swim up? After all, we just said spiders can swim, so we understand your concern. Not to worry though, the chances of a spider swimming up the toilet after it has been flushed are next to nothing. Except in rare cases where a the spider is a diving bell spider, once you have flushed a spider down the toilet, it would most certainly got drowned and die, so there is no chance that spiders would be swimming up.

What are the Most Common Types of Spiders found in Swimming Pools?

For those who have a swimming pool in their homes, there is no denying the fact that spiders are always around these artificial water bodies, and it could really be a cause for concern most times. no one wants to have spiders moving around or swimming in their swimming pool, and when you consider that a spider’s bite could be really poisonous, you would want to do your best to get rid of them as soon as possible. So, what are the types of spiders you would find in a swimming pool? They include but not limited to; fishing spiders, diving bell spiders, tarantulas, etc. These spiders would always be in and around your swimming pool because they can swim.

If you are one of those who have been asking in the past that, can spiders swim? You must definitely have your answers now. Spiders are a really adaptable set of organisms and they would most likely look for a way to survive and adapt in many situations, so it is not a surprise to see that a large percentage of them can swim.