Green Bottle Blue tarantula is one of the most beautiful tarantulas in the world of spiders. It is especially recognizable for its green-blue pattern, which glows immediately after a new skin change. It comes from the New World, a hybrid-created, semi-arboreal tarantula that is mostly found in South America, around Venezuela and Paraguay. Significantly, they have an average growth rate of up to 5 inches when they are fully grown. Males live up to 5 years, and females live up to 14 years.

If attacked or stressed, these tarantulas are ready to attack with their characteristic venom and fibrous hairs that they throw into the air with their hind legs. Nevertheless, the care and willingness to care for them will bring out the true potential in them. This beautiful tarantula abounds in a bright range of colors, so because it is not hidden in a hole, it stays outside in the terrarium and is pleasant to look at.

The Green Botle blue tarantula was first archived and spotted by Embrik Strand in 1907 under the name urypelma cyaneopubescens. Thus, it slowly entered the newly created genus Delopelma, and Alexander Petrunkevitch was credited with that in 1939.

That is why we know them today under the synonyms Aphonopelma and Avicularia. But the most significant discovery was made by Gunter Schmidt, who through various observations of these species and subspecies, characterized this tarantula as Chromatopelma, a name given to it based on its striking blue color.

He distinguished between Chromatopelma and Afonopelma based on the tarsus, hairs, eye position, and reproductive organs of the females.

This was a big sensation when it was first imported, especially with the fact that the colors of both sexes are iridescent. The whole carcass is characterized by a light orange color on the abdomen, has a blue notch to green, and the colors glow in the light. Another tarantula closest to this genus is Cyclosternum. The difference is that the latter are very sensitive to moisture, while the Green bottle tarantula has adapted to live in dry conditions. Only baby Green Bottle Blue tarantula  should be kept in a humid environment, as they are often found in dry bushes from where they come from, making holes covered with dense cobwebs where they wait for prey. 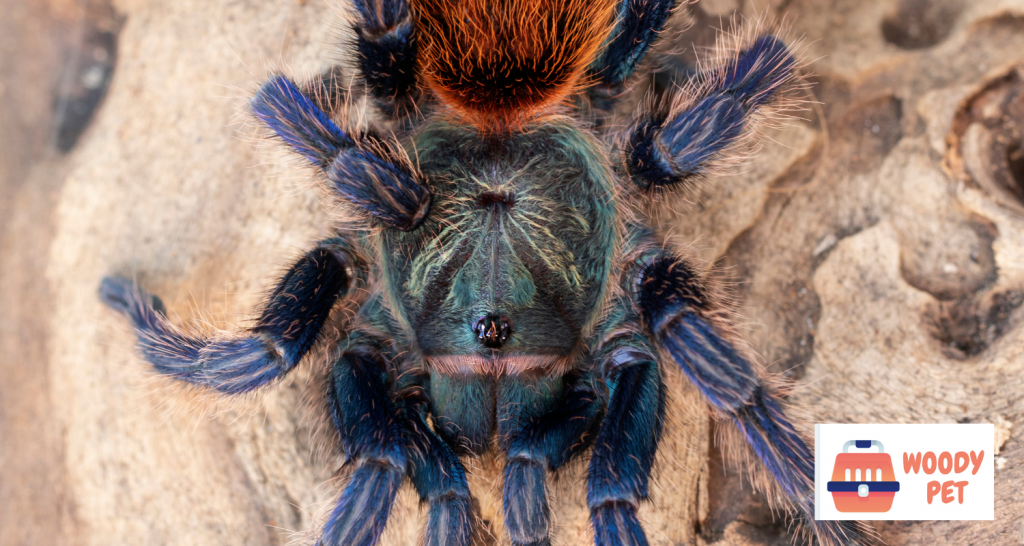 The Baby Green Bottle Blue tarantula must be fed regularly every day, in order to grow faster and to achieve those colors. As for this tarantula, it is generally known and accepted that they are difficult to breed in the sense that they are difficult to grow and change skins. They are also very rare, because during the reproductive act they have to be left alone, which is very difficult given that they are kept at home. Extra caution is required when trying to move to a new terrarium while these tarantulas are smaller. Why is that? Because they are new tarantulas, they are very fragile in relation to their exoskeleton, so it is necessary to use auxiliary objects in trying to get up and out of the terrarium.

Because this tarantula is a terrestrial spider that usually stays out of the ground and is considered semi-arboreal in the wild, it likes to stand on low-stemmed plants and make deep web tunnels. Their terrarium should have enough space in a horizontal position, ie four times the size of the spider in each direction. Even if they want to sit on the surface, enough ground should be put in case if it climbs high, the fall will be mitigated. Also, with more soil, this spider will be able to dig tunnels.

Regarding the Green Bottle Blue tarantula enclosure, it must consists dry air with a temperature of 25 degrees is recommended, ie average room temperature. They should be provided with a small container of water, but protected from the outside so as not to overflow the water and raise the soil moisture.

Due to the many hairs they have on the abdomen, if they are defensive, they release them into the air and cause irritation for humans. But first for their protection and because of their fragility, we do not suggest holding these tarantulas in hands, and since they want to be on the surface of the earth, it is good to leave them like that and just observe them.

As they grow bigger, they need to feed on bigger worms or crickets, but still not bigger than their body.

This tarantula is recommended to be fed every 4 to 7 days, and adults every 7 to 10 days. But they should not be given food for two weeks after their molt. Because of the references in pop culture and their rare beauty, we highly recommend this tarantula if the tarantula keeper has intermediate experience. 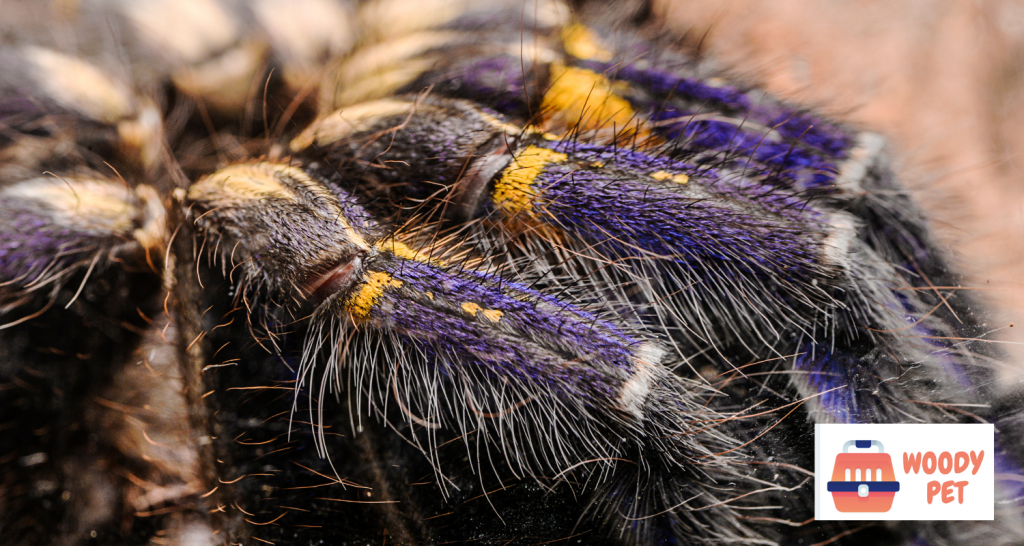 Green Bottle Blue tarantula does not want to use her speed, so from the experience of tarantula keepers, they say they are very obedient tarantulas that are easy to store. There are no problems with these tarantulas, as they often have a quick response when it comes to feeding, so those who keep them can take full control of their diet. They immediately rush to the prey, but know how to refuse food when it is time for molting. Therefore, if you notice that this tarantula is hiding and does not want to go forward, it means that after molt it will come out with an increased appetite.

There is no special treatment regarding the Green Bottle Blue tarantula care. The American singer/songwriter Billie Eilish possess this kind of tarantula as a pet and can be seen in a lot of home videos how she is able to put it in her mouth and have fun with her, making her non-treating tarantula. In 2019, in an interview she has with James Corden, he holds her tarantula in an effortless way to conquer his fear of spiders.