Every horse has its distinctive markings. Interesting thing about it is the fact that no marking is exactly the same on more than one horse.

The horse face markings are an important part of these animals. While two horses standing one to another may have both black markings, the shape will be different. With their uniqueness,  the markings are crucial for the horses’ identity. Therefore, every horse keeper should know that in bureaucracy, these markings will serve as a tool to create some sort of identification document for the horse.

In this article we will explain different sorts of horse face markings, their colors, shapes, and meaning. Also, we will take a peek at the horses’ leg markings as well.

Every horse owner, or a potential one, must know his horse well and in order to accomplish this, among many other characteristics, should learn to recognize the special marking on his pet’s face.

Let’s get started and find out what is there to know about horse face markings.

A well-proportioned white marking, or only a random white dot is called a star and it can be found in the middle above the horse’s eyebrows. The so-called star can be huge and all over the horse’s forehead, or to be manifested through just a little white hair. This is one of the most recognizable horse body markings.

The white stars can show up and be visible during the youth of a horse but it can vanish as the years are passing. 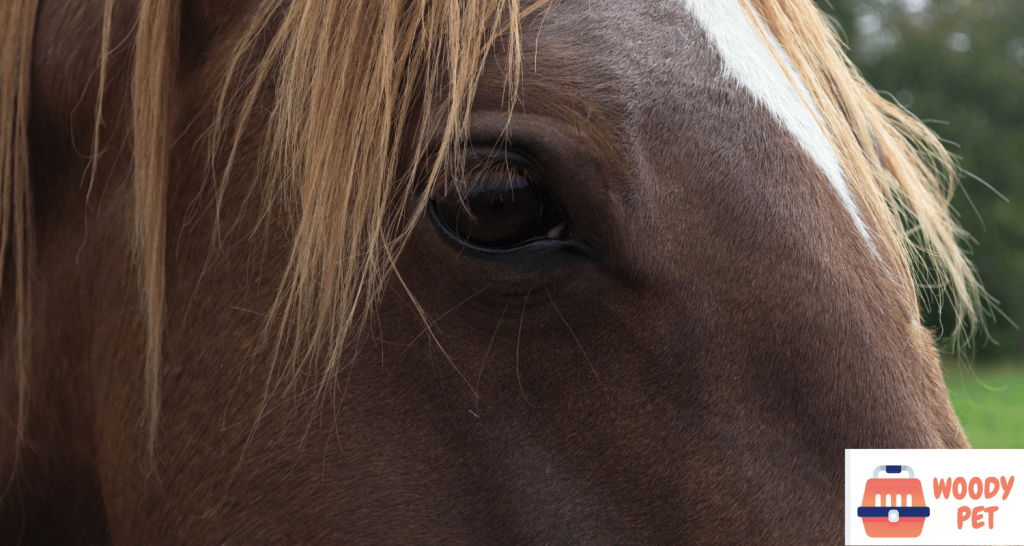 When practically the whole face of the horse, from beyond the mouth, through into the area between the eyes and the forehead is covered with white color, it makes for a bald-faced horse marking. Sometimes a horse with such markings is called an  apron faced horse.

Unfortunately, these horses can be vulnerable when they are more exposed to the sun.

On the other hand, interestingly, some horses with a bald marking can often happen to have blue-colored eyes.

A strip, or a stripe, is a straight unproportional white line that starts from beyond the horse’s eyes, on the forehead, and goes down to the muzzle.

Sometimes, the stripe can be joined by a star on the forehead.

When these markings are not connected to each other, on the horse’s face there can be even three different markings, and besides the strip and the star, there can be a snip.

The snip marking can be found right between the horse’s nostrils, a small area covered with white, or it can be all over the area around the nose.

As we mentioned, a face of a horse can have a snip joined together with star and strip markings, can be separated with only a star, and can blend in together with a blaze.

The blaze horse markings can be similar to the strip, or stripe ones. They are, however, more broad than the stripe, and start from the forehead, and end somewhere below the middle between the eyes and the horse’s nose.

Like the star markings, the blaze may appear in a more balanced manner, or just can lay unproportioned.

A curious fact about the ermines is that they are genetic characteristics for the horses that have them.

The ermine horse marking is a little different colored dot that can be found inside the white-colored part on the face of a horse, such as the blaze or the star markings. Besides emerging as a horse face marking, the ermine can too be seen as one of the leg markings on horses. Ermines can have a ball-like figure or just be misshaped.

As we mentioned above, horse face markings sometimes go one with another, or more of them together.

More likely, you would see a horse that has a star with a snip, stripe with a star, or a snip, star and a stripe all combined in three.

They are written down in vet’s documents about each horse that has them, and are an important part of determining a horse’s identity.

After we mentioned and analyzed the horse face markings, we can take a look at the horse leg markings’ names as well.

A pastern is a white hair placed between the horse’s fetlock and the hoof. The pastern can be only fragmentary, or may cover the whole circle of the area in that part of the leg.

These are markings that appear very often at horse’s legs. They literally resemble socks, and they are manifested as white hair spreading from the hoof, up to almost the knee of a horse. There is no rule whether a horse can have the socks on only one, two, three, or on every four of the legs.

The boot marking is similar to the sock, only longer. They also cannot reach the horse’s knee.

These markings are level higher than the boot ones. They begin above the hoof and go beyond the knee, and some of them even cover the whole leg in white hair.

The coronet marking is a white hair that covers only a small part beyond the hoof.

The horses are amazing animals, and among the many traits and characteristics they possess, the markings make them even more unique.

We believe that we covered all the horse face markings possible, and we added the horse leg markings as well.

We learned why the horse markings are so important: They make each and every horse distinctive and help their owners to remember them, and serve as a sign of recognition. Also, they are valuable as identification marks in the official records, whether for breeding, or such as medical documents.

Every marking is also a special story for itself: there are no identical markings, only similar.

If you own a horse and it has got a bald face marking, then make sure you take a lot of care for him, or her, and pay the utmost attention. This marking means that your horse is vulnerable to the power of the sun and your animal deserves to be protected in such a situation.