We think of goldfish as a little, inoffensive fish that we keep in our homes in its little fishbowl, just like we see them in movies and TV series. But being a freshwater fish (the ones that can be found in a river or a lake), how can they behave while being in the wild? And most importantly, how big can they get when they aren’t limited to a tiny space like a fishbowl?

This little fish, when being pets, can grow between 1 to 2 inches and grow as far as 6 inches in bigger fish tanks. However, when they are free to swim in an even bigger environment, that size and its weight can raise exponentially. In some cases, the goldfish can actually be an invasive species of fish by the way they can reproduce. After said that, there are some more facts that you need to know on how big goldfish can really be.

How big can goldfish get? 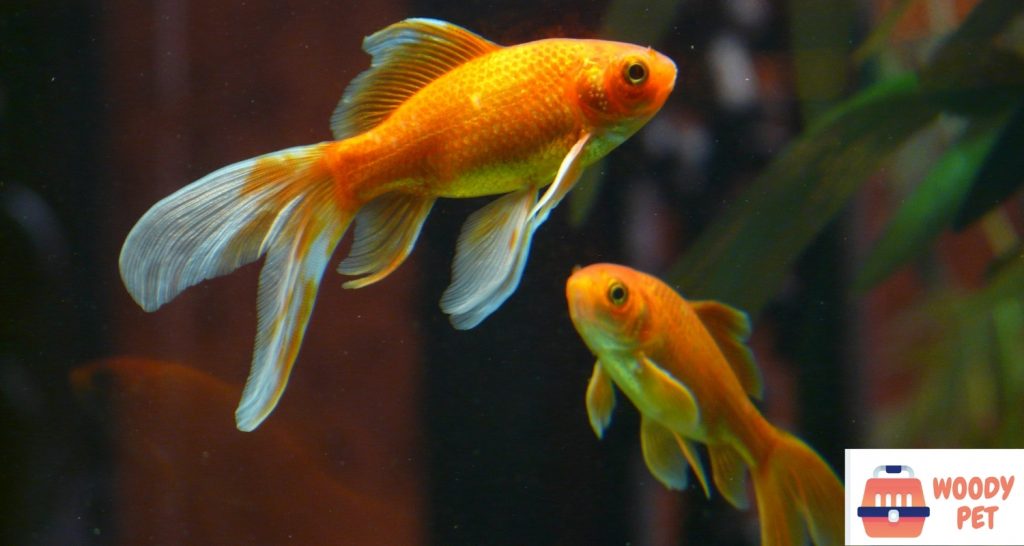 How big do goldfish grow?

Like most things in life: It depends! The conditions in which the goldfish is kept are as important as just the kind of goldfish it is.

If water conditions, space, the type of food given to them are ideal, as well as what kind of goldfish is (or fancies, as it is commonly said) would influence in how big the goldfish can grow.

For instance, a comet goldfish can grow to a max of 8 inches, while the common goldfish can be as large as a foot long.

As said before: If the fish have enough space to thrive, the water is properly clean and have a good temperature, the tank isn’t overcrowded and the correct amount of food is given, the goldfish can grow as colorful and big as they can be.

What is the largest goldfish?

Although it doesn’t look like they can grow as much, some people have found massive goldfish specimens around the world.

A guy in the UK found a goldfish measuring 16 inches in length and weighting 5 pounds, while a little girl found another one 13 inches long and 5 pounds 4 ounces in weight.

And if only verified records are your thing: According to the Guinness Book of World Records, the largest goldfish was owned by Joris Gijsbers from the Netherlands. The fish was 18.7 inches long or 47.4 centimeters. That’s barely the same length as the maximum size of a bullet tuna, at 50 centimeters.

Do all goldfish get big?

The short answer for that is: No. Not all goldfish do get big. It depends on the environment.

As said before, there are some conditions which need to be met in order for goldfish to get big. How the water is (is it warm? is it clean?), is the goldfish eating live or processed food, what kind of goldfish is, how many in the same space and so many other conditions. So no, not all goldfish get big.

What is the smallest goldfish you can get?

Fancies like the moors and the fantails goldfish are the smallest goldfish you can get. When they’re already large grown adults, the maximum length from the tail to the mouth is around the 8 inches mark (around 20 centimeters).

Although that sounds actually a bit long, that’s only achievable if the previous conditions were met and when that goldfish are already a fully grown adult. It is pretty normal to see tinier goldfish in these and other varieties.

Still, you would probably want an appropriate space for your new pet. Even 8 inches goldfish are way too big to put them in tiny, constrained spaces like little fishbowls, as seen in movies and the TV.

Do goldfish grow to the size of their environment?

Actually, some stores would sell you fancies like the common goldfish as “pond suitable”, because those goldfish can grow as large as 18 inches, easily outgrowing a fish tank.

Again, as answered in the other questions, it depends on the environment: How cold/warm it is? How dirty/clean it is? How good/bad the goldfish are eating? So yes, some goldfish do grow to the size of their environment.

Do fishbowls are a good place for a goldfish?

You probably have seen them in movies, TV series and comics: A beautiful golden fish swimming around in a cute little fishbowl. The thing is, that’s mostly a cliché: Fishbowls aren’t actually good places for a goldfish.

The issue with a fishbowl is mostly space and oxygenation. While in a fish tank you can put filters and oxygen suppliers, you don’t have enough space to do the same thing in a fishbowl.

And just picture this: An 8 inches adult goldfish trying to move in a fishbowl. What if it isn’t just one goldfish but several? You probably get them when they were younger, but remember that goldfish can get bigger, especially when all factors are taken into account.

How big can goldfish get conclusion

If you made it this far, you already learned that those little tiny goldfish can get big and become literal monsters in size (well, more like 18 inches monsters).

What they really need to thrive is to have a good habitat with a nice temperature, very clean and with good air to breathe, good food (especially live food) and most importantly: the appropriate space necessary to bring all those options (filters, air supply) to give those goldfish a better quality of life.

A pond is actually the next best thing, relative to habitat, for a big goldfish. A bigger fish tank also can do the trick but the fancies of goldfish that can live there can be limited to certain species. You can always ask to a professional to choose which is best for you case.