People have been fond of horses ever since they met these animals. They are keeping them as pets, for recreational riding, as well as for labour on the farms and transport.

This relationship lasts for millennia, after the human race tamed them, and the horses have proven to be worthy companions of people ever since.

In the entire world, there exist more than 350 horse breeds.

However, throughout the time, there are created some special breeds of horses, which possess unique characteristics. In this article, we will focus primarily on Rare horse breeds. We will help you to get to know them better, find out what makes them different from others, as well as distinguish their traits and habits. So let us get started with learning about these unusual horse breeds, how they were made, their beginning, history, development, and how did they manage to get a special place as people’s valuable friends till this day.

The Konik horses possess endurance and strength. They are able to better the life of birds and wild animals in woods with marshes because of their manner in which they feed themselves.

These horses are considered rare because they are tiny little animals, whose height can go from 71 to 86 centimetres (21 – 34 inches). Created in Argentina, South America, by Patrick Newtall and his son-in-law Juan Falabella (hence the name of this horse breed), this breed was brought to the world during the 19th century. Despite its size, which would normally qualify them as ponies, the Falabella horses are enlisted into the Miniature Horse registries.

The Falabella horse is docile and a nice animal. They are famous for their endurance – they can survive in rough conditions.

They are descendants from the Welsh Pony and the Shetland Pony. The Falabella kept their ancestors’ looks – short legs, strongly built, like a true cob. In addition, the Falabella horse traces roots to a local South American breed, the so-called Criollo horse. The Criollo breed comes from the Pampas region – which is included in Uruguay, Argentina and Brazil.

This type of horse belongs into the category of the exotic horse breeds and is coming from the country of Turkmenistan, on the Asian continent. Its traits are immense fortitude, strength and fitness. Because of these characteristics, they are used for races, jumping and dressage.

But endurance and physical ability are not their only qualities. In the year of 2013, the Akhal-Teke breed was chosen to be the most beautiful horse. The reason for this is their metallic hair. Also, this rare horse color they have is the exact thing why they are considered as special. 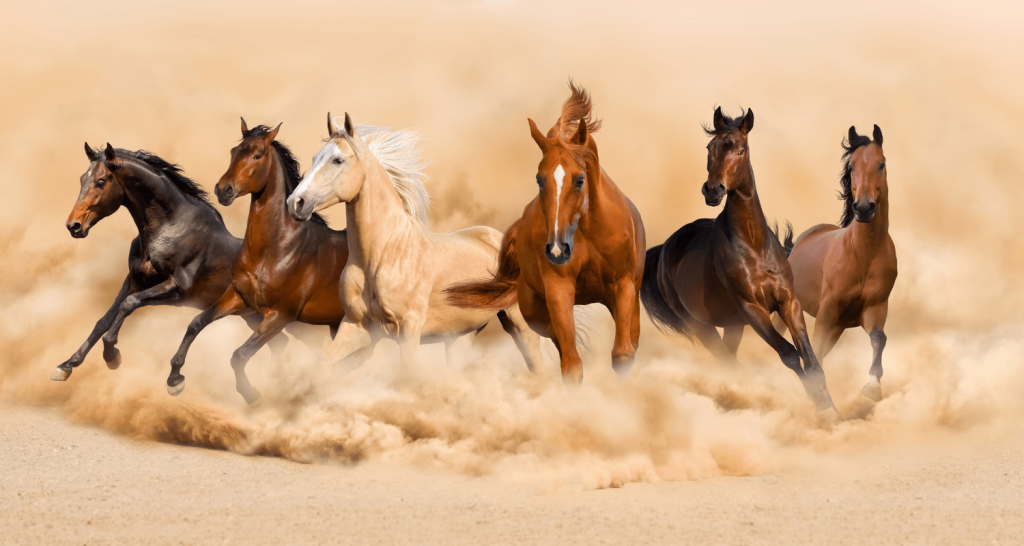 The Fjord Horse comes from Norway, European country in the region of Scandinavia. They are some of the most ancient horse breeds that exist. Just like the Konik Horse, they are relatives to the Tarpan Horse. They are seen as special because of their grayish – brown color.

Like the Falabella Horse, the Caspians are also decided to be small horses, and not ponies, despite their size. The Caspian Horse was known by the ancient Persians, and they are portrayed in the royal seal of the King of Kings, Darius the First, or Darius the Great (550 – 486 BC).

This horse breed is the most rare in the whole world. Unfortunately, The Galiceño horses are numerically the most endangered breed in the world, with only about a hundred pure specimens of them left. The sadder thing about them is that they probably are not able to breed, and are likely going to be extinct.

They also are a small breed of horses, with average height from 122 to 137 centimetres, (from 48 to 54 inches or 12-13.2 hands). Their ancestors, most likely, are the Garrano Horses from Iberia, modern – day Portugal and Spain.

The Shire Horse comes from England, and is descendant from the English Great Horse, used as a warhorse on the British Isles and Europe. Later, the Great Horse was mixed with the Dutch Friesian Horses and thus, the Shire Horse was produced.

They are docile and eager to be trained, and are famous for their immense strength and endurance.

The Shire gave us the largest horse that ever existed. His name was Sampson, later known as Mammoth. He weighed 3.360 pounds, or 1524 kilograms, and was 219 centimetres, or 86,2 inches tall.

In this text, we managed to cover seven different rare horse breeds that exist in the world. The Polish Konik Horse, Falabella Horse, Akhal-Teke Horse, the Norwegian Fjord Horse, Caspian Horse, the Galiceño Horse and the English Shire Horse.

We believe that every one of them is special in their own way. Some are rare because of their unusual characteristics, and some are rarely to be found, being but only few in numbers. We explained what are the traits they are known for, the way they were brought into this world, and pointed out why some breeds are less fortunate and are sadly, going into extinction.

These horse breeds are precious animals and great friends of humans, so therefore, we think they deserve the greatest deal of attention.

If you want to keep some of these horses, now you know more about them and we hope that this article was very helpful in that regard.