Horses are magnificent creatures and every breed is unique in its own way. Some of the horse breeds are smaller and shorter, some are bigger and taller. Millions of people around the world have developed great affection for horses, and would love to keep them and take care of them, despite the great deal of attention and diligence these wonderful creatures require.

In particular, in this article we will distinguish the tallest horse breed of them all. Here are the five breeds of horses that are considered the tallest, from fifth to first in the next order: The Dutch Draft, Percheron, Belgian Draft, Clydesdale horse, and the Shire horse.

Therefore, we will focus on the Shire horse breed in this text, and will provide you with valuable information about this race and its history and characteristics. To begin with, we established that they are not only the tallest, but they are also also the largest horse breed in the world.

Origins and History of the Shire Horse

The United Kingdom has the privilege to be the place where the Shire horse breed has its roots from.

The English Great Horse, the breed that the Shire horse has as his ancestor, comes from the central part of England and it was used primarily for military purposes, both in Britain and the mainland of Europe. The English Great Horse was capable of bearing soldiers on its back in their loaded and equipped armour, which could weigh up to 181 kilograms (400 pounds).

In the period from the 16th to 18th century, with the help of breeding English stallions to mares from the Netherlands, which were carried to England, the Shire horses were upgraded and developed as both farm and draft animals, as well as for merchant trading. These Friesian horses, brought on the British Isles by Dutch engineers, have strong colours and are large in appearance, and that’s where the recognizable look we now know of the Shire horse is coming from. The Friesian horses still exist today and they got their name from the region they come from, Friesland, in the Netherlands.

Characteristics of the Shire Horse

Despite its appearance, the Shires are very kind animals. They are not hard to train, and possess high-level endurance. In fact, they are gigantic, but very calm, graceful, and magnificent.

In the United States, where more than half of the Shire horses are stationed, they are utilized for the usual farming and drafting purposes, and are also employed for participation in jousting contests.

The Shire horses are capable of dragging heavy vehicles. They can be a substitute for the tractors while working on smaller farms. For example, wagons used for sightseeing. Also, they serve a purpose for the beer manufacturers, those who deliver their merchandise via horses and wagon.

Needless to say, they are often purchased for recreational riding. 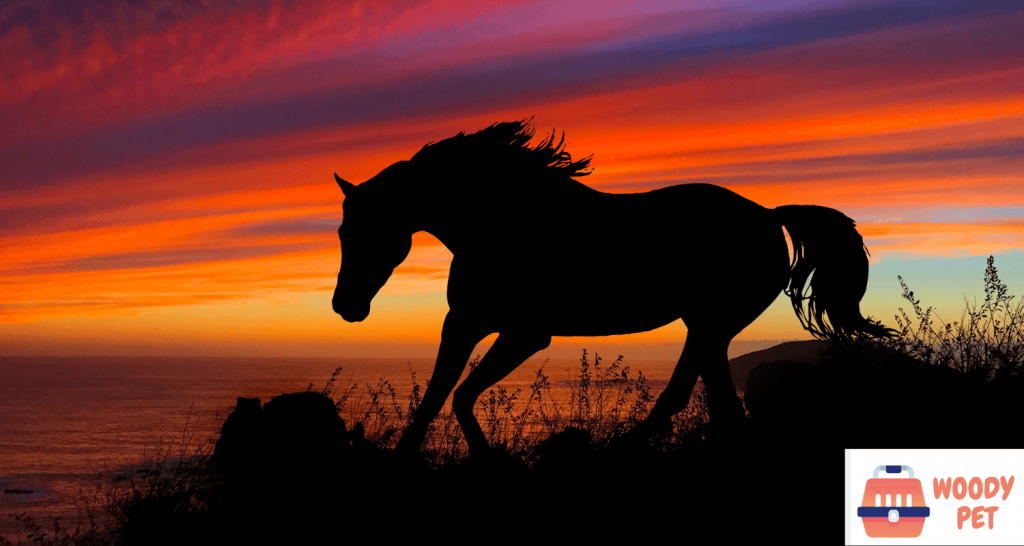 The Shire horse mares can be of grey, black, roan and bay colour.

The stallions of this breed can be born with one of these colours: grey, chestnut, black, brown, roan, sorrel and bay. Since the Shire horses are the tallest horses of all, this fact inevitably raises the question:  What is the Shire Horse Height?

On average, the Shire stallions are around 173 cm (68 inches) tall. They have a bristly appearance, have hairy legs (this hair has a special name – a feather), and a characteristic long mane. The Shire horses are broad and deep-shouldered  Their heads are long and thin, and their eyes are compliant and big, while the neck is lengthy and a little rounded. The ears of the Shire horses are long and slim.

Largest Horse That Ever Existed

The tallest and largest horse in the world that ever lived was exactly a Shire horse named Sampson, being 86,2 inches (219 cm) tall, and 3.360 pounds (1524 kilograms) in weight. That is more than a ton and a half. When we know this, it is only understandable that this massive Shire horse got himself a nickname which befits his reputation: Mammoth. He lived towards the end of the 19th century in England, specifically in a place called Toddington Mills, in Bedfordshire. Accordingly, he earned his place in the Guinness Book of World Records.

If you are planning to keep a Shire horse, you should be ready for their maintenance and good care. This is because the Shire horses have a long lifespan. They can live around twenty-seven up to thirty years long. If you are not ready for keeping a horse for this long time, then you should reconsider your decision. Maintaining a horse, especially of this size, is a difficult task.

How much is the Shire horse price?

The price of the sheer horse can move from 150 up to 20,000 dollars. This means that you have plenty of choice to pick from – based on a specific Shire horse characteristics you are searching for in particular.

The Shire horses are wonderful animals which are considered the largest and the tallest of all the horse breeds.

Despite this, they are known as gentle, obedient, tame, and are eager to learn and easy to be trained. One of the best things about them is that they have a long lifespan and one can keep them for a long part of his life.

The Shire horses have a long and quite an interesting history of existence and development through the centuries.

They also provide mankind with multiple capabilities and can be put into a good use for many purposes, such as working on a farm, carrying wagons for breweries and sight-seeing wagons, forestry, as well as being kept for recreational riding.

After the mechanisation of agriculture, sadly, their number significantly dropped and are considered as endangered, with only a few thousand of them in the world. Still, their numbers are improving and there is hope that this rare and beautiful kind of horse will survive as species.