Tallest Horse in the World

The horses are, generally speaking, tall and big animals, except for the small horse breeds and the ponies. Every person’s first association with horses is their great appearance, strength and endurance.

There are many large breeds of horses in the world. For example, such are the Shire horse, the Clydesdale horse, the Belgian Draft, the Percheron Horse, the Dutch Draft horse, the American Cream Horse, the Russian Heavy Draft Horse, the Suffolk Punch Horse, the Dole Horse, the Thoroughbred Horse, the Hanoverian Horse, and many others.

We humans are all amazed by their grandiosity and we cannot help but be enchanted by their large appearance.

Knowing this, we are curious to know which are the tallest and biggest horses by name in the world?

Which is the Tallest Horse in the World That Lives Still in 2020?

As far as we know, the tallest horse in the world at this moment is called Big Jake. Big Jake is from the Belgian Draft horse breed and is nineteen years old.

This record was previously held by a horse named Remington, a representative of the Clydesdale Horse breed. Remington was measured on the 6th of June 2009 as 80 inches, or 203.2 cm tall in Texas, USA.

The horse called Big Jake lives in Smokey Hollow Farm, Poynette, Wisconsin, in the United States of America. The honor of being Big Jake’s owner is Mr. Jerry Gilbert, a farm manager.

Big Jake has become widely famous and a lot of people went to see him with their own eyes, wishing to gaze upon his magnificence.

Millions of people have seen Big Jake in online videos out of curiosity.

Interestingly, he was purchased as a three-years old foal, and his 240 pounds were not indicating that one day he would become the tallest horse in the world. Also, Big Jake’s parents were not distinctively tall or large horses; they were, in fact, of pretty normal sizes. Still, Big Jake’s development from a foal into a horse was rapid when it comes to his height and size.

Big Jake’s owner cares about his horse a lot, because the animal’s keeping requires a stern diet and a lot of water. Big Jake needs different types of vitamins, and cannot have any sugar.

Owning the tallest and biggest horse in the world is not an easy task. While a stall for average horses is 12 x 12 feet big, Big Jake demands a stall of 20 x 20 feet. When he is carried, they put him in a semi-trailer.

Mr. Jerry Gilbert says that during the 70’s, when he used to be a little kid, he would always check up on the horses included in the Guinness World Records, of which he was a great admirer. Jerry was particularly interested in the fastest, biggest or tallest horses. Now, he has the honor of being an owner of the tallest horse in the world himself, a fact which makes him very happy and satisfied.

When he was younger, Big Jake was included in many draft horse public contests. Today, he is nineteen years old and is deservedly retired, resting at the farm with his fellow horses, or enjoying the attention of the many visitors that are coming to greet him.

The owner of Big Jake, Jerry Gilbert claims that the horse also demands a great deal of friendly awareness, and loves being scratched on the neck and rubbed on his belly.

Now it has been ten and a half years since Big Jake was measured as the tallest horse in the world. While it is hard to believe that we will have another contender for his title in the near future, no one can be ever certain. 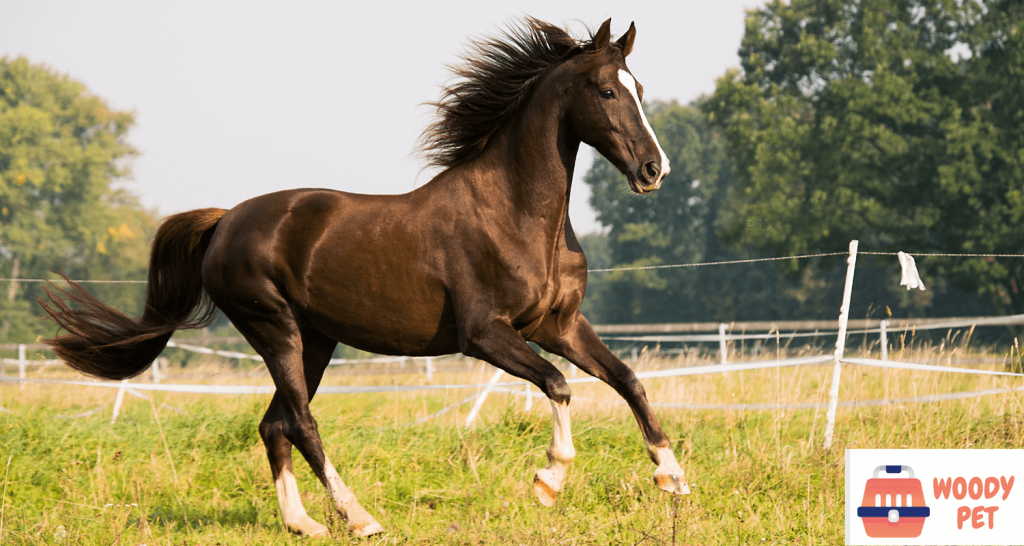 The Tallest Horse That Ever Existed

The tallest horse in the world that ever existed, according to the Guiness Book of World Records, was of the Shire horse breed. He was named Sampson, but because of his massive body structure, was also nicknamed “Mammoth”. Sampson, the horse that lived in Toddington Mills, Bedfordshire, England, during the end of the 19th century, was 86,2 inches (or 219 cm) tall, and 3.360 pounds (1524 kg) in weight. Sampson was both the tallest and largest horse in the world of all times.

Generally speaking, the Shire horse, which was represented by Sampson, or Mammoth, is one of the tallest horse breeds in the world.

We hope that this article is helpful for you to learn how demanding the task is keeping a horse, and especially large horses, like Sampson or Big Jake.

The bigger the horse is, the more attention and diligence it requires. We see that, for example, Big Jake’s diet is more strict, and he needs bigger space and even some special means for his own transport.

Another fun thing we found out is that a horse is not necessarily born as an unusually big foal, in order to keep growing bigger and bigger. Big Jake’s size and weight were entirely regular.

While it is hard to believe, maybe soon we will find out that another horse is contending with Big Jake for being the tallest horse in the world.