Let’s talk again about what can a goldfish can eat. It is possible to underestimate how much this little fish can actually eat and you probably can end up surprised in how many options there are to feed goldfish in general.

As any animal species, including human beings, feeding is one of the most important steps in order to assure a good quality of life. Going with the recommendations and don’t going overboard can guarantee a happy and healthier lifestyle for any living being.

In the case of the goldfish, you can have many options just because they are omnivorous. That means they can actually eat mostly everything you put at their disposal. But that doesn’t mean you can give them everything you find around. Let’s see what are the options and which ones you should avoid, to ensure you fish can grow to its adulthood and carry on with any of its activities (besides swimming).

What can goldfish eat? 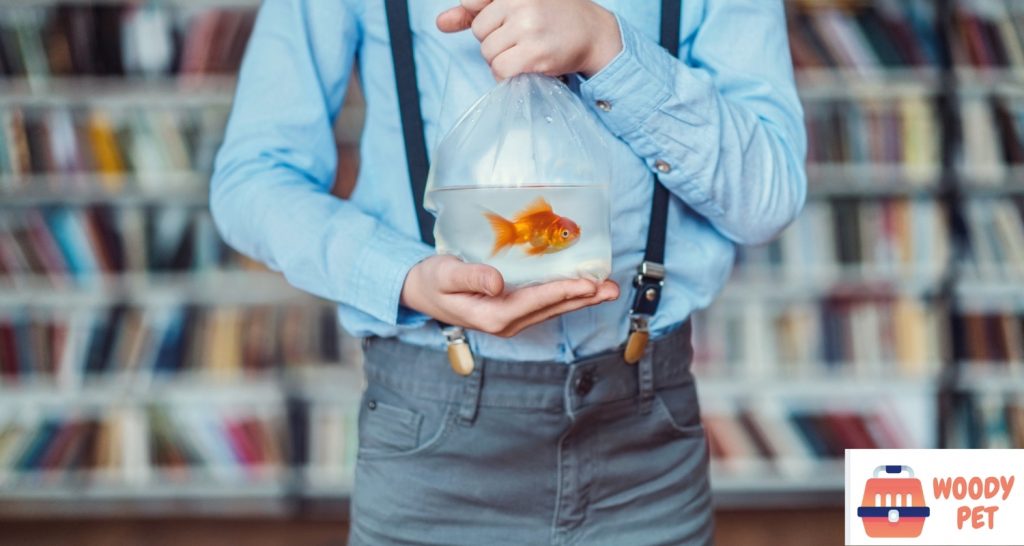 While most of its fish food is a combination between fiber and some live food, in the wild and in ponds they can also eat some aquatic plant leaves.

Examples of what can you offer them as food that are vegetables may be cooked peas (without the shells), cooked rice, any kind of lettuce (doesn’t matter if it is iceberg lettuce, arugula lettuce or any other), spinach, turnip greens, kale, radish leaves, broccoli, grapes, watermelon slices and even orange slices.

So yeah, they can eat quite a lot of vegetables, leguminous vegetables and even some fruits. Just remember not to overfeed them as they don’t really know when to stop eating.

The diet of a goldfish is mostly based on pellets and some food rich in fiber, but that does not mean they can have a treat. So yes, the goldfish can eat meat. But there are some distinctions in what can they eat.

Most of the live food they can eat have some level of proteins that, in small quantities can be really good for the nutrition and overall health of the little goldfish. However, in large quantities or when given in a continuous basis, can be really harmful for a goldfish. Remember, all in an excess is bad.

Some of the meat the goldfish can eat may include bloodworms, brine shrimp, ghost shrimp, daphnia, mealworms, crickets, earthworms and waxworms, all of them being properly treated and they can be live, frozen or freeze dried.

What can goldfish eat while they’re in the wild?

The kinds of things goldfish can eat while they’re in the wild can really surprise you. It is quite impressive to see that in the wild, in order to survive of course, they have a really bigger diet that pet goldfish (and really other fishes) can just dream on.

When they are in the wild, goldfish can eat small crustaceous, zooplankton, phytoplankton and even detritus (like the kind of things other fishes and animals expels from behind. Gross, but nutritive to them).

All of those options are not as impressive as the ones that are enabled because goldfish have pharyngeal teeth (yes, a fish with teeth, but back in the throat). The amount of options they can encounter in a lake for instance can be really varied and they would not stop eating at all.

They can also eat mosquitoes and other insects (including mosquitoes’ larvae), tadpoles, spawn, frogs and little fishes. In an environment where it isn’t somebody to stop them, apart from predators, they would thrive. That’s probably why it is such a bad idea to free goldfish in a lake (with some countries actually can fine you for that) because they can disrupt the balance in the habitat, competing with other creatures living in there.

There are so many misconceptions in what goldfish shouldn’t eat, mostly because of habits we see on the TV or in movies. Some of them are really wrong and definitely needs to stop from happening again.

The biggest of the mistakes written in the memory of the people is giving a goldfish bread or crackers. That is a bad idea for a goldfish. Although they can eat it without any issues, is the process at their digestive system where the bad things can happen.

Bread and crackers have yeast and some have gluten as well. Both of those ingredients can expand while being inside of the little fish and it is possible to cause constipation, one of the goldfish biggest nightmares.

Another thing to avoid is overfeed them. Even though they are really smart, they can’t control how much they can eat and much worse: They can’t even know when to stop. Basically, they would continue to eat until the food is gone, totally nonstop. That is bad if you gave them too much food.

What can goldfish eat conclusion

There are so many things goldfish can eat to continue thriving and living a good and healthy life, extending its lifespan in the process. The amount of options extends from the little particles that exists floating in the water (like zooplankton and phytoplankton) to actual live food.

Having pharyngeal teeth in their throats, they can basically eat whatever you throw at them. Of course, that does not mean that everything is actually suitable for our little fish. You can always ask to a specialist for more information on what goldfish can eat, but there are also many options ready in pet stores designed especially with goldfish in mind.

And the most important thing to remember is: All in moderation is a good practice, all in excess can be really bad. Please do not overfeed your little goldfish and be sure to just give them tiny quantities of good quality food (quality over quantity).