Macaws are a species of birds that is quite common and that is known for their vibrant colors. One of these eye catching macaws is the Chestnut fronted macaw. The chestnut fronted macaw is a bird that will catch your attention. Another name for this bird is a severe macaw and the scientific name for it is Ava severa severa. Of the small macaws, the severe macaws are the largest. Packed with personality and charm, these birds are a package. They are easy to care for and being social birds, they make some of the best talkers. Are you thinking of adopting or purchasing a Chestnut fronted macaw? Read more to find out if this is the let for you.

The chestnut fronted macaw is mostly green in color, with patches that are chestnut colored under their beaks and on their foreheads. They have a patch in their face that is bare. One feature unique to macaws that this bird exhibits is dark feather circles that are around the eye. The beak and feet of this bird are gray in color. They have a patch of blue feathers on the crown of their head. On the edge of their wings are red patches that are distinct, and the feathers on their tail are blue in color. Physical appearance cannot be used to distinguish between a female severe macaw and a male one. A genetic testing procedure would therefore be used if there was need to find out the sex of the bird.

An adult macaw is a length of 15 to 20 inches. Their weight is right below 1 pound. The chestnut fronted lifespan is at about 30 years but macaws that have good health can exceed this age. 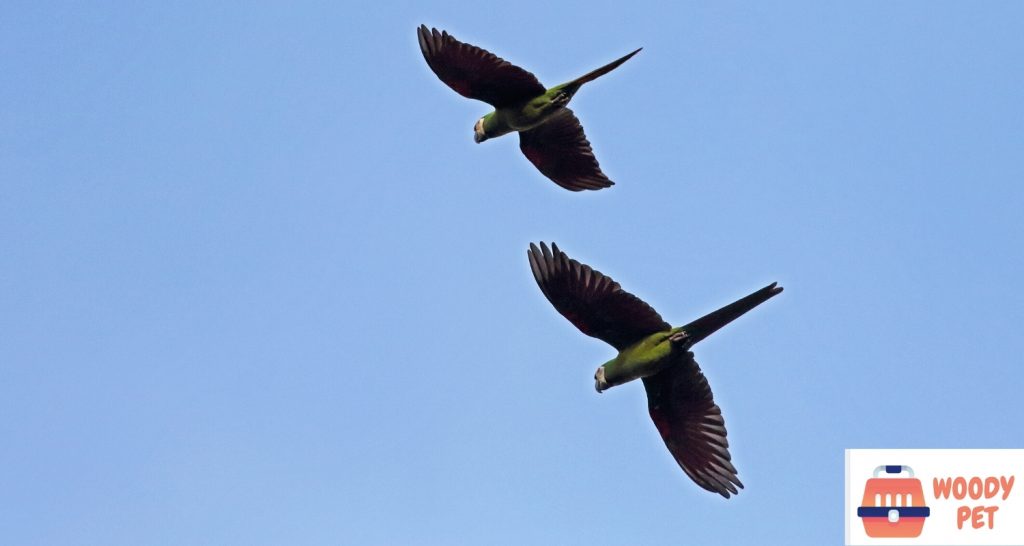 The chestnut fronted macaw is a bird that is native to northern Southern America and southern Central America. It is a common bird in Bolivia and Panama. Other than the bird being known as the severe macaw, in Brazil they also refer to it as the Brazilian Green macaw. This species of bird has been introduced to some areas of Florida.

The chestnut fronted macaw thrives in habitats that have trees such as forests. They tend to go to areas that have flooded rivers. These birds nest in cavities that are in high trees and often cone together at the clay hills which are found along riverbanks and are created through erosion. These are spots where you are likely to find a chestnut fronted macaw.

The chestnut fronted macaws feed on fruits, flowers, nuts, seeds and green leafy matter and fruits. For your let macaw, a diet that consists of a pellet mix of high quality seed and fruits and vegetables that are fresh and safe for birds to eat. The amount of food that a chestnut fronted macaw feeds on will depend on the size of the macaw. On average, half to ¾ a cup of vegetables and fruits and the same portion of pellet mix everyday will be enough for your bird. It is best to feed it twice, in the morning and at dusk. Severe macaws feed on a variety of fruits. They can eat leafy greens, cucumbers, sweet potatoes, zucchini and carrots. Nuts such as almonds, hazelnuts, walnuts and macadamia’s can be good treats for your macaw pet. You should never offer avocado to your bird since it is toxic to them.

Farm field are a great source of food for these birds. If there is a farm close by, these birds will flock the field early in the morning. This means that these birds can cause great losses to farmers. It is believed that the clay that these macaws find on clay hills supplement their diet. The clay not only provides the chestnut fronted macaw with minerals that are essential, but they also protect them from being harmed by toxins.

The Severe macaw is a friendly and comical bird. They have personalities that are larger than life, which makes them a great choice for pets. The chestnut fronted macaw is also a curious bird. They like to play games and can learn how to solve puzzles. These birds also intelligent. They can easily learn tricks, are responsive to training and they have speech abilities that are quite impressive. With proper socialization, these birds bond quite well with their owners and other people in general.

One trait about these birds that is unique is that they do not like to touch. Though they are friendly birds, the severe macaws seem happier to be close to their owner, without necessarily petting or cuddling.

The chestnut fronted macaw is a species of macaw that hardly gets sick. In cases where they get exposure to other birds that are ill, the severe macaw may be susceptible to getting psittacosis and proventricular disease. These birds can show behavioral patterns such as loud screeching and plucking their feathers when they feel ignored or neglected.

Having a regular exercise regimen, a balanced diet, daily interaction and proper hygiene will ensure that the severe macaw remains healthy.

When socialized properly, the chestnut fronted macaw can become the most ideal pet. The best time to socialize these birds is when they are young. These birds can get quite noisy so if you stay in an apartment, this bird will have the neighbors banging at your door because of the noise. They also need attention from their owner since they require frequent interaction and need to get out of their cage for at least a few hours in a day. These birds also tend to be wilder compared to other macaws. On the other hand, chestnut fronted macaws have their good characteristics too. They are less prone to catching diseases, are of a smaller size and are also quite intelligent. If you want a bird that can learn new tricks and words, the severe macaw is the bird for you.