The great green macaw is also known as the great military macaw or the Buffon’s macaw. There are about 18 species of macaws in the world and the great green macaw is one of them. This species of macaws is a South and Central American macaw that is found in areas such as Colombia, Ecuador. Costa Rica, Panama, Honduras and Nicaragua. The status of this bird is that it is an endangered species which is continually showing a decreasing trend. Earlier on, it used to be considered either a subspecies of the military macaw since they seem closely related. Over the years, the numbers of the great green macaws have decline by about 50 percent due to the loss of their habitat in the range of Central and South America.

As the name suggests, the great green macaw is almost entirely green in color. These birds are large. They are about 85 to 90 cm in length, and have blue on their upper tail feathers, on their rump and on their lower back. They also have blue at the tip of their tail.

These birds have a red band that runs across the top of their bill, and bare patches of skin that have lines of red feathers. The great green macaws are the second heaviest if the macaw species, though they are somewhat shorter than other macaws and have a shorter tail. Their weight is at about 1.3 kg. The younger birds of this species have grey colored eyes, and as they mature, their eyes turn black. They also have colors that are duller and shorter tails. Since their ranges overlap, the great green macaw may be confuses easily with the military macaw. 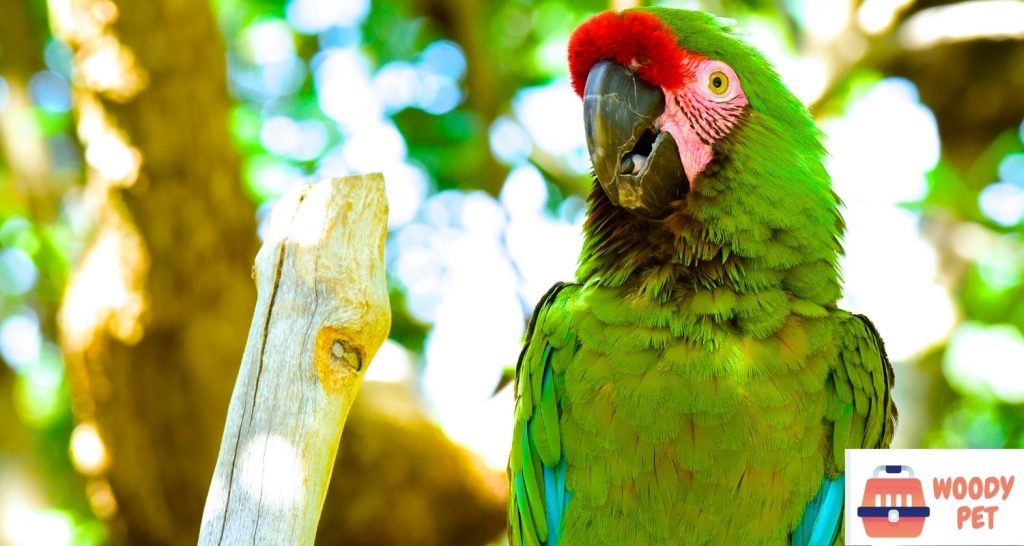 The great green macaw birds live in forests edges and in humid lowland deciduous forests. They are found in the wet lowlands of the Atlantic, from Colombia to Panama to Honduras. They are also found in in the coastal lowlands of the Pacific, in Panama and in Western Ecuador.

There are two sub species of the great green macaw. One sub species has its habitat in Costa Rica, where there are more humid woodlands. The area here where it breeds is an evergreen rainforest that is non-seasonal and an average temperature of around 27 degrees all year round. The sub species of the great green macaw that is found in Ecuador is divided into two areas, the far north that borders Colombia and the coastal range of mountains in southwestern Ecuador.

The great green macaw diet is made up of nuts, fruits and seeds. It may also include roots, bark, bulbs and flowers. Compared to the scarlet macaw, this macaw is able to crack open nuts that are larger. They have a beak that is especially suited for this. Some of the plants that have been found to form part of what the great green macaw feeds on are the trees Cespedesia macrophylla, Dialum guianense, Laetia procera, Byrsonima crispa, Croton schiedeanus and Qualea paraensis. They also feed on Solanum rugosum, the large shrub, and the palms Welfia Regia, Raphia taedigera, Iriatertea deltoidea and Socrates exorehiza.

These birds often move around in groups. These groups are usually made up of about 4 to 8 birds. Rarely do they exceed 8. In the lowlands of Costa Rica is where these birds breed but then disperse to locations that are higher after. When migration, they gather in flocks to go search for food. These flocks can be of about 18 birds in Costa Rica. They also forage and rest in the upper areas of the canopy. In Nicaragua, these birds allow intruders to come close to them as they feed, being unwary of the presence of humans. Vocalization is also part of the great green macaw behavior. The loud noises that these birds make can be hear at far distances. The birds of this species that are in captivity will emit growls and squawks that are loud, and might even make groaning or creaking sounds.

Why are the great green macaws endangered?

The great green macaw faces many threats. The population of these birds has significantly declined as they lose their habitats. Today, the number of these macaws left is about only 1,500. The great green macaws have lost their rainforest habitats due to human encroachment, logging and agriculture. Efforts have been made to conserve and preserve these birds. The continual threats from man have destroyed even the primary forest, which are the native tree species that have existed for centuries without being altered. In the areas around Costa Rica, about 16 percent of land has been interfered with, as trees have been logged down and regrown as secondary forests. These secondary forests are however not suitable for the great green macaws to nest in, and raise their young ones. The towering trees in primary forests have cavities that form hollows in which these birds can create their nests. They also obtain water from the cavities and food from the nuts. The cutting down of trees in Costa Rica has definitely affected the great green macaw birds. These birds also face threats from illegal pet trade and being shot by farmers, who consider them crop pests.

The great green macaws are attractive birds that have markings that are distinct. These large macaws are easy to spot, as they almost entirely green in color. These birds are highly sociable, just like the others species of macaws. Even outside breeding seasons, they travel in groups as they forage and search for food. These birds are listed as endangered species as their numbers continue dwindling day by day and they now stand at less than 2,500 individuals. The figures for A. a. guayaquilensis individuals are at about 30 to 40 in Ecuador, which is alarming. Efforts have been made for their preservation and conservation, as more pressure is being put to protect the species of this bird that are in their home country.