Macaws are a family of birds that you must have heard of at some point. You may know about these birds but you do not know much about one of its species, the red fronted macaw. Well, this is the place to be, as we cover all there is to know about this species of birds. Macaw species range from white macaws, green macaw, blue spix macaw, the Camelot macaw, the Harlequin macaw, the Catalina macaw and the red fronted macaw; just to name a few. The red fronted macaw are a group of macaw birds that are small in size. They are calm birds, affectionate and goofy. These birds have both an inquisitive personality and are intelligent which is great when you want them to learn a thing or two. All these features of red fronted macaws make them lovable and desirable as pets.

These birds have green as their predominant color, with patches on their forehead, behind their eyes and on their shoulders that are red. Their feathers have a teal blue color, and their tail ranges from teal blue and green. Around the eye, there are patches of pale skin. The red fronted macaw size is smaller than other species of macaws. They have a length of about 24 inches and are quite light, with a weight of about 500 grams (425-550 grams). For juvenile red fronted macaws, they have heads that are green and they begin to turn red after about six to twelve months. The males and females of these species have similar colors, and cannot be differentiated by their appearance. 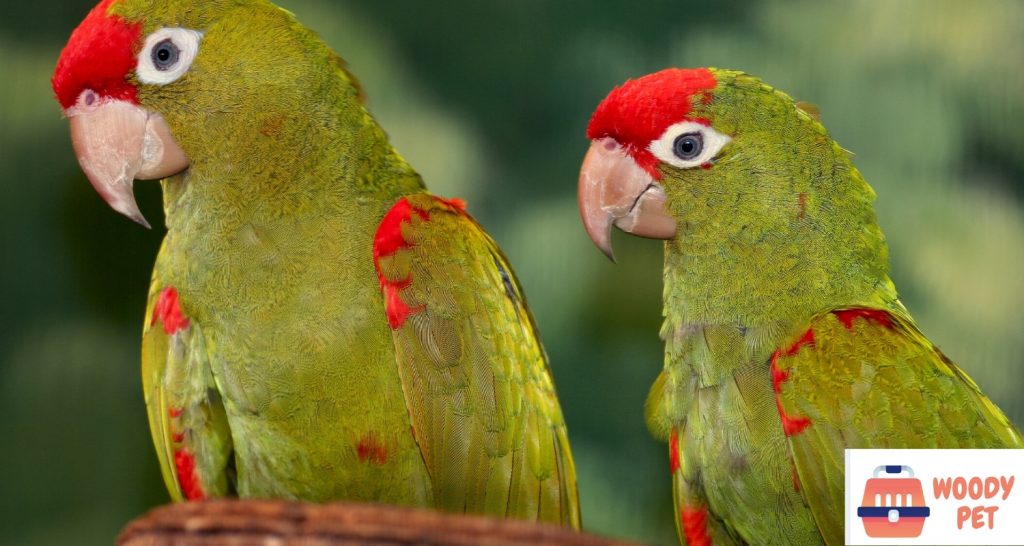 The red fronted macaws are found in areas that are warm such as the dry valleys that are in Bolivia. Here, there is minimal rainfall of about 300 to 800 mm and the vegetation is made up of thorny scrubs. These birds thrive in tropical and terrestrial regions. In the cavities of canyons that are by the river side and in gorges is where they nest.

The red fronted macaw lifespan can go up to 50 years in the wild. These birds have been found to live for more than 25 years in average. The red fronted macaws are monogamous by nature and form bonds that last all year-round. They maintain their bonds even outside breeding seasons for preening or copulation. The red fronted macaw partners have been seen to exhibit caressing behaviors such as grasping beaks and nibbling the feathers on the face. These birds breed between the months of October and March, once a year. Their nests are made of sandstone mainly, and they nest in areas such as gorges and in the cavities of cliffs that are angled. For each season, they lay about 1 to 3 eggs and incubate for about 26 days.

All birds have a way in which they behave. They also have personalities that are unique to each one of them. The red fronted macaw personality is an interesting one. These birds are quite social and they are often found in groups. Their flying groups normally consist of about 3 to 5 birds. When they want to take part in activities such as roosting or foraging, they form larger groups of up to 30. Younger flocks of these birds are more active and more vocal. They stay close to their nests even when flying. The red fronted macaws rest during the day, often during the hours when it is hottest. Red fronted macaws have also been found to have different patterns of playing. They play in patterns such as wrestling using their beaks and fencing, pecking at each other, tossing objects at each other and alternating body jerks while sitting in tree branches. During breeding seasons, though these birds are not territorial, they defend the environment that is surrounding their nest cavity.

The red fronted macaw diet consists of nuts, fruits, vegetables and vegetation. Their main source of food cones from tress such as the Jatropha hieronymii. They also feed on grasses found in the Bolivia valleys. Most of these birds have turned to crops that are cultivated, since there has been destruction of their habitats and sources of food for grazing or agriculture. They therefore prefer corn as a crop for feeding on. In arid habitats, red fronted macaws feed on cacti which is usually a source of water and food for them. They also chew on the barks of trees and on sticks.

These birds are quite vocal when they are communicating. The red fronted macaw speech is impressive, as they can learn how to whistle and how to speak. They are intelligent birds that try to mimic the conversations that humans have, and from an early age, they can learn a few basic words. Calls between partners for the red fronted macaws begins as a loud squawk which will minimize to a soft chuckle or coo. When there are predators of there is something wrong, there birds will give loud screeches or caws. Older red fronted macaws have higher pitches than the juvenile ones.

Red fronted macaws are one of the species of birds in the macaw family. Just like their name suggests, these birds have a red coloring at the front of their heads which distinguishes them from other birds and other macaws. They are birds that are praised for bring the hardiest species amongst those in their family and being able to quickly adapt and maintain good health. This makes them a great option for a pet. They do not require much maintenance, but it is important to give them attention and care so that they do not fall sick or become lonesome. Give them enough room to move freely and regular baths to prevent diseases and keep them clean. You’ll notice that they actually get playful and goof around while taking a shower. You will definitely enjoy having a red fronted macaw pet, and teaching it a few words will be a great activity to do.