Orange baboon tarantula, or the scientist name Pterinochilus murinus, also known by the name OBT, Orange bite, is a terrestrial tarantula from the Old World. But, from time to time she shows behavior similar to semi-arboreal species. She is unique and beautiful in a sense of her orange bright colors and specially for her aggressive attitude. She comes from Central Africa (Burundi, Kenya, Zambi, Zimbabwe). Females have a lifespan of 15 years and 6 inches in growth. While male tarantulas live only four years and are certainly smaller in growth.

Very important for this tarantula is that it is defensive and immediately shows aggression, so we recommend it for expert level tarantula keepers. There have been cases where it has been observed hitting the ground with its feet when it is aggressive. Even when they are smaller, they are very fast and can bite you, ie the chances for that are very high. It is possible to be teleported from in front of your eyes, because they have incredible speed, so after that you will not be able to find this tarantula, and to stay outside is very dangerous.

It is therefore recommended not to hold this tarantula in your hand, as it has a stronger venom than other tarantulas, so it has been medically proven that swelling and inflammation of the muscles caused by it can do great harm to humans. Because they are Old World tarantulas, they resort to the old method of defense, biting, but have no urticating hairs. 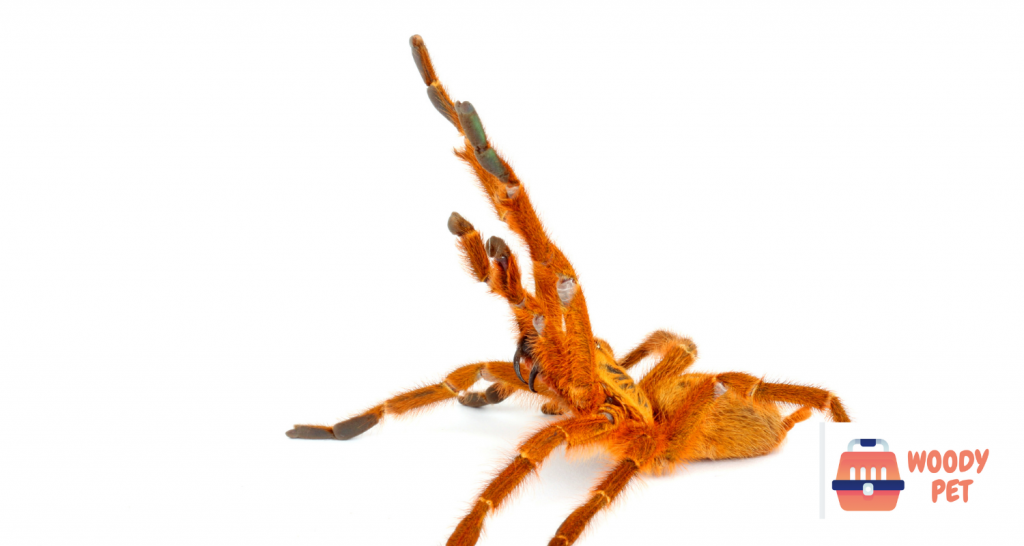 In the first place comes the typical color of this tarantula, and it is the golden color that dominates this tarantula, with a dose of light green in the legs. These have the longest hairs. Usambara Orange baboon tarantula (Mountain Variant), they had the typical orange color through which this tarantula is known and unique, this is the most common and we will stick to it.

These tarantulas are very defensive, and this shows through the fact that they are very fast, so if you want to hold them in your hands, it is very dangerous because they will immediately start to run away. They should not be taken out of the terrarium with bare hands, because they attack immediately and can bite you.

They are known for their strong poison, and they are also known for knitting thick nets. Be prepared that all objects and the entire terrarium will be covered with a dense network of tunnels, where this spider will hide and wait for its prey. Their venom is very strong, and can cause several side effects to the human body, depending on the size of the spider and its current venom. A single bite can cause swelling, muscle aches, vomiting, and even fever and colds to some degree. Therefore, even for professional tarantula keepers, we do not recommend keeping this tarantula! As for feeding the tarantula, it is necessary to follow a decent diet for this tarantula, which feeds during the day. These tarantulas love to eat, so they should be given enough food, especially at a time when they are mating.

They feed on common foods such as worms, cricket, cockroaches, locusts. They have no problem, they will eat everything within their reach. 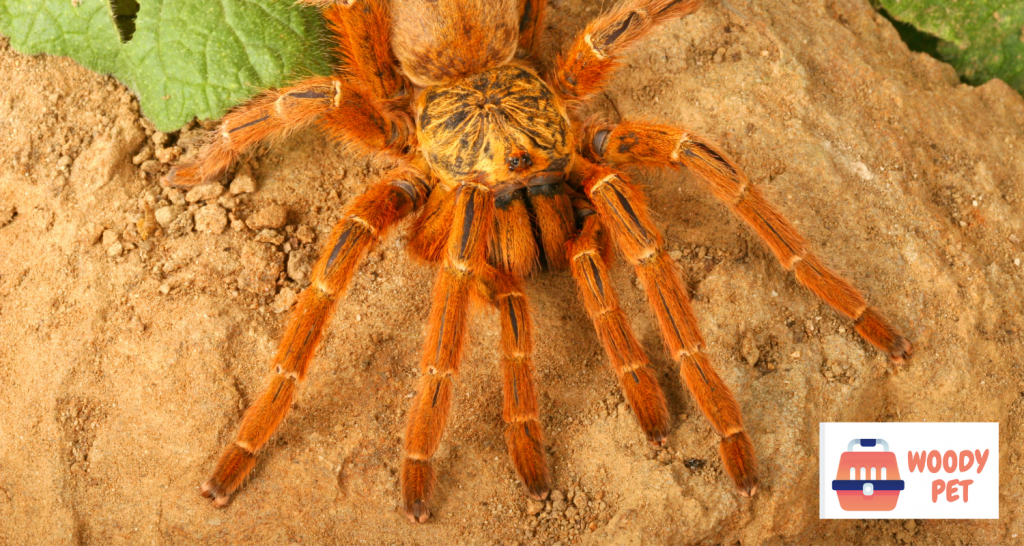 Because these are very fast and agile, it is necessary to secure the terrarium and close it nicely, because they would always try to escape from the terrarium. They live alone, so do not add other tarantulas to a terrarium, as this will lead to cannibalism. In terms of Orange baboon tarantula temperature , she needs a balanced temperature, ie from 24 ° C to 28 ° C. Like the terrarium, the temperature contributes to the tarantula’s behavior and whether it is satisfied. If she is stressed, she will stop eating and will be very aggressive, which will eventually result in death. Humidity should be around 40-60%.

Although the Orange baboon tarantula is unique in its appearance, and really stands out from the others in its beauty, still caring for it can be a big challenge, even for the most zealous tarantula keepers. Hence there is a well-known joke among all tarantula keepers, that exactly this tarantula is “teleported”, ie this joke refers to its speed and ability to escape in a millisecond.

If they meet outside, they would not attack but approach escape. If you handle this tarantula, it will surely bite you, and we do not recommend it. Therefore, if you want to enter this hobby, you need to start with other lighter tarantulas, so this one is left for last. Although, there are many people who keep this tarantula at their own risk.

But if you agree not to touch it or take it out of its terrarium, this tarantula is easy to keep and does not require special care. We would care even less about food and diet. This is all you need to know about the Orange baboon tarantula care